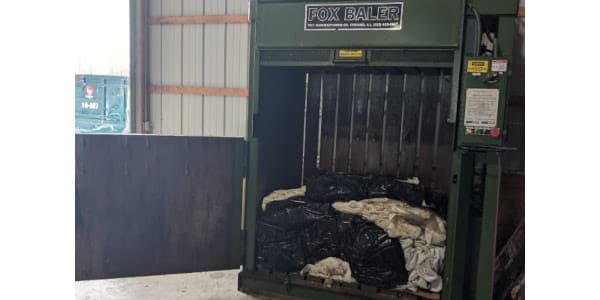 The pilot drop-off location will be at the Sunfield Recycling Center in Sunfield Township, under the direction of Eaton County. It’s the first pilot site of this grant for agricultural film plastic. (Farm News Media)

LANSING — A pilot program in Mid-Michigan is offering a new way to recycle many kinds of film plastic commonly used for farming.

The pilot program started as a grant received by the Michigan Recycling Coalition from the Department of Environment, Great Lakes, & Energy to develop film plastic recycling opportunities for agricultural, greenhouse, and marine film plastic. Michigan Farm Bureau and several other partners supported the grant to increase recycling options for film plastic used on farms.

Farmers know how quickly silage bags, bale covers, mulch film, drip tape, and other film plastics can add up. An initial survey found that more than a quarter of respondents store film plastic for more than 4 months, taking up valuable space at their operations.

When it’s all said and done that plastic needs to go somewhere. The problem is, film plastic tends to be landfilled — and that adds up quickly.

That’s where the pilot program comes into play.

The pilot drop-off location will be at the Sunfield Recycling Center in Sunfield Township, under the direction of Eaton County. It’s the first pilot site of this grant for agricultural film plastic.

“Michigan Farm Bureau has supported this project because of the member developed, grassroots policy on Resource Recovery and are glad to see an opportunity for farmers to be able to recycle their film plastic,” said Tess Van Gorder, Michigan Farm Bureau associate policy/regulatory specialist.

As part of the pilot program, those looking to recycle their agricultural film plastic will receive guidance on how to prepare the materials before their appointment to drop it off. There will be a recovery fee of 8 cents per pound to recycle your film plastic.

“We are excited to see this pilot program getting ready to launch and appreciate all the work that has been done to make it happen,” Van Gorder said.

The program is tentatively scheduled to be up-and-running by the end of May.