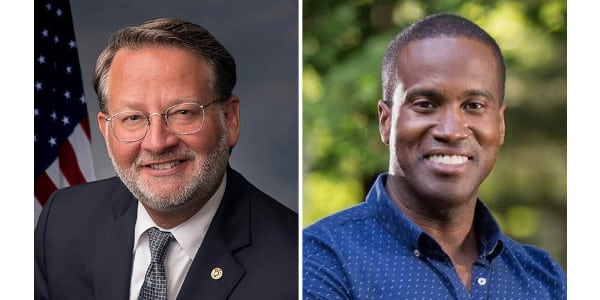 Hosted by MFB board member Mike Fusilier, a Washtenaw County produce farmer and chair of the organization’s AgriPAC Committee, hosted the virtual interview forum, posing ag-specific questions to both candidates as they seek the highly coveted “Friend of Agriculture” endorsement. (Courtesy photo)

Peters, an Alma College graduate, has served as Michigan’s junior senator since 2015. Before that he served three terms in the U.S. House of Representatives, two terms in the Michigan State senate and previously as Michigan’s lottery commissioner.

Republican opponent, James, a graduate of the United States Military Academy and a combat veteran, served eight years in the United States Army. He currently serves as president of the family business, James Group International, an integrated logistics and supply chain management firm.

Although the forum was scheduled months ago to be held in Lansing, the COVID-19 pandemic required a change in plans. According to Fusilier, the entire virtual interview forum was recorded and will be shared with all 65 county-level Farm Bureau Candidate Evaluation committees for a side-by-side comparison of each candidate’s response and policy positions.

“Our goal is to aid the Farm Bureau’s grassroots endorsement process by sharing these interviews with County Farm Bureau candidate evaluation committees so they’re well informed before making recommendations to the MFB AgriPAC Committee,” Fusilier said. “We appreciate the willingness of both candidates to participate virtually — and we’re pleased how well it worked in light of the circumstances.”

Recognizing a need and an opportunity to engage proactively in the political arena to enhance agriculture’s voice, MFB members approved the creation of the organization’s political action committee known as AgriPAC in 1977.

According to MFB Government Relations Specialist Matt Kapp, the organization’s methodical endorsement process has garnered more than a golden reputation among political candidates.

“The success rates of AgrPAC-endorsed candidates ultimately being elected to office has been very impressive,” Kapp said, adding that local volunteer campaign-support is also part of the endorsement package. “Over the last three elections, AgriPac has a 91% success rate, which is a testament to the value of the Friend of Agriculture endorsement.”

According to Kapp, county candidate evaluation committees have until May 27 to provide their endorsement recommendations to the MFB AgriPac Committee, including their pick for the U.S. senate race between Peters and James, after watching the virtual interview forum and their responses to the following series of questions:

Program to aid farmers and consumers