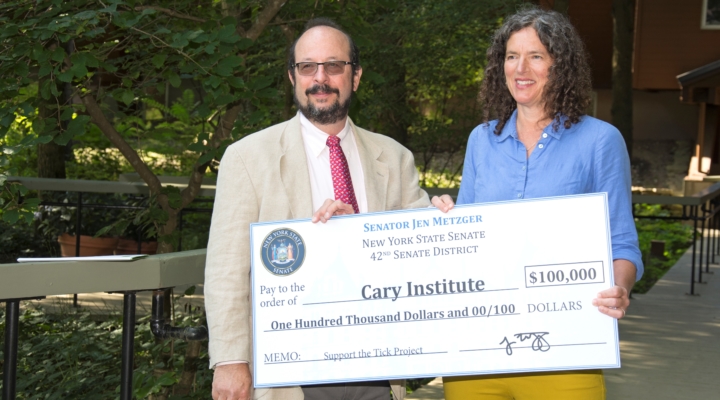 MILLBROOK, N.Y. — State Senator Jen Metzger (SD-42) recently toured the Cary Institute of Ecosystem Studies in Millbrook where researchers have been studying the ecology of Lyme disease for the past 25-years. While there, Metzger held a press conference with Cary Institute President Joshua Ginsburg announcing $100,000 in state funding to support the research organization’s Lyme disease prevention study, The Tick Project. Metzger worked to secure this state funding as part of a 2019-2020 budget appropriation, which came through the New York State Department of Health budget. The funding for this work was part of a larger $250,000 appropriation that Metzger secured in the last weeks of the legislative session to fight tick-borne diseases.

“Lyme is the fastest growing vector-borne disease in the United States and accounts for more than 80 percent of tick-borne diseases,” explained Senator Metzger who is all too familiar with the disease, having been diagnosed with Lyme five times. “I have long admired Cary Institute for the invaluable work the organization does to advance our understanding of Lyme and ways to prevent it. I look forward to reviewing the findings of The Tick Project, once completed, and to supporting community-based implementation plans that will effectively reduce the incidence of this terrible disease. At the state level, I will continue to fight to make sure that this public health crisis gets the attention and resources it deserves.”

Forest fragmentation, climate change, and expanding tick populations are all factors that contribute to the spread of Lyme disease. The New York State Department of Health reports that over 20,000 New Yorkers have Lyme, and the figure is likely greater, given the challenges of diagnosis. The Hudson Valley region, which Metzger represents in the State Senate, is the hardest-hit region in the state.

The Tick Project, which began in 2016 and is set to conclude in 2020, is a five-year study testing the efficacy of neighborhood-based prevention measures in 24 neighborhoods in Dutchess County. The first ecological intervention involves a naturally occurring tick-killing fungus, Metarhizium anisopliae; a strain of this fungus has been developed into a bio-insecticide called Met52, which is sprayed on vegetation and kills ticks that are looking for hosts to feed on. The second intervention is the ‘Tick Control System’ (TCS) a small box that contains bait infused with a low dose of the insecticide, fipronil. Mice and chipmunks, which are largely responsible for infecting ticks with the Lyme bacterium, feed on the bait, killing the ticks that they carry.

Following the press event, Metzger toured the Gene E. Likens Laboratory and met with Dr. Richard S. Ostfeld, a Disease Ecologist who directs The Tick Project and works with his team to advance understanding of tick ecology, mitigate disease risk, and predict when and where exposure to tick-borne diseases will be high. Also present was Dr. Gary Lovett, a Forest Ecologist who directs the Catskill Science Collaborative (CSC), which promotes scientific research and environmental monitoring in the Catskill region and facilitates collaboration and information exchange between researchers and scientists working in the Catskills. CSC also functions to make valuable scientific data free and easily accessible to the public through the CSC online data portal.

During the 2019 legislative session, Metzger, who chairs the Senate Committee on Agriculture, introduced legislation to advance understanding and awareness of Lyme and other tick-borne diseases, and mitigate disease risk among farmers and farmworkers.