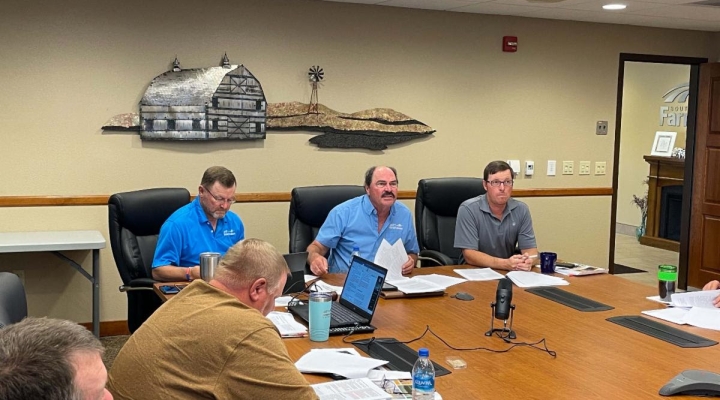 “For more than a century, our family farm and ranch focus has united us as members – not a specific commodity or issue,” Sombke said.

To ensure SDFU policy reflects the current needs of South Dakota producers, a committee of members representing all Farmers Union districts in the state meets annually to review the organization’s policy. After intensely reviewing the organization’s policy, Policy Committee members share their suggested updates and changes with all members who attend the Annual Policy Meeting.

“Policy is the guts of this organization,” explained Hank Wonnenberg, a Dallas farmer, local banker and chair of the 2022 Policy Committee. “As a grassroots organization, the policy members develop becomes our playbook. It tells us where we stand on all issues.”

Throughout the year, Wonnenberg says he and his wife, Melissa, make note of local issues that impact them and other farmers. “This way when we get together with other members during policy meetings, we can present the information to see if it is something that should be added to our policy book so that Farmers Union can address the issue,” Wonnenberg said.

The Wonnenbergs brought up concerns over a local water project that has the potential to displace crop and grazing land. After discussion, members decided the best course of action was to do more research and resume discussions on the topic during the policy meeting held during SDFU State Convention, December 15 and 16.

“Nothing falls on deaf ears. I appreciate how as a Farmers Union member, our voice is heard,” Wonnenberg said. “Farmers Union has state and national lobbyists – so when you feel adamant about something, if other members agree, you know it will be followed up on.”

To address timely issues, during the 2022 Policy Meeting, members brought forward two Special Orders: short staffing of federal positions which support farmers and ranchers; and encouraging the EPA to enforce an existing clean air law that favors ethanol and other renewable fuels.

Discussion supporting the first Special Order, titled FSA/Conservation/Extension Support, focused on the impact short staffing has had on farmers and ranchers’ ability to apply for disaster relief programs or gain access to timely information.

“These are the departments that work hand-in-hand with so many farmers and ranchers. They need to have the tools they need to help us,” said Gail Temple, a Clark farmer and District 3 Director.

The Special Order directs Farmers Union to lobby for pay increases for staff. “When there is a staffing shortage, it does not mean there is less work to do. As farmers and ranchers, we work closely with our local FSA, NRCS, Extension staff, so we know they are overwhelmed – morale is low,” Sombke said. “These experts are as important to many farmers and ranchers as their agronomist or nutritionist. To keep good people, salaries need to be competitive.”

The second special order also focused on the federal government. It was drafted in response to a recent Supreme Court ruling which determined in order for the Environmental Protection Agency (EPA) to enforce regulations, the regulations need to fall under existing Congressional law.

“This special order does not say Farmers Union agrees or disagrees with regulations contained in the Chevron doctrine,” Sombke explained. “What it says is, based on this Supreme Court ruling, the EPA is now required to enforce the Daschle/Dole Clean Air Act of 1990, Section 202L. And Farmers Union advocates the EPA does just that.”

Section 202L of the 1990 Clean Air Act is a law requiring that the cleanest and safest liquid fuel available for combustible engines needs to be used. Years of data show renewable fuels like the higher ethanol blend E30 and biodiesel are clean burning and safe.

Bottom line, Sombke explained this Supreme Court ruling has the potential to bolster South Dakota’s renewable fuels industry and the family farmers who raise the crops to supply this industry.

“As a farmer we know to take advantage of opportunities when they present themselves. This is an opportunity for us to make hay – we don’t plan to pass it up,” Sombke said.

All policy updates and special orders discussed during the Policy Meeting will be voted on by members during the 2022 State Convention. Temple said she is eager for policy discussions to resume.

“Policy is who we are and what we stand for as an organization,” Temple said. “I enjoy listening to everyone’s input.”