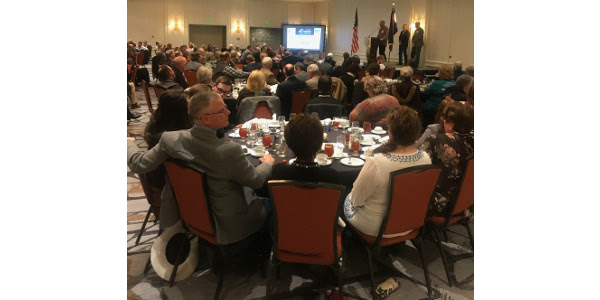 On Tuesday evening, January 16th during the Colorado Cattlemen’s Foundation Banquet, awards were presented to individuals who have made a significant impact on the industry. (Courtesy of Colorado Cattlemen's Association)

DENVER — Members of the Colorado Cattlemen’s Association (CCA) gather twice a year to gain knowledge about their industry, create policy that drives their trade association, and present awards to those who have served the state’s beef industry in an exemplary fashion.

Last week’’ Mid-Winter Conference, held on January 15-17 in Denver, focused on agriculture-related issues that will be addressed during the 2018 session of Colorado’s General Assembly. Committee meetings were also held during the conference, which help establish the organization’s policies and stance on a wide range of legislative and regulatory topics impacting Colorado’s beef industry. “CCA operates through its diverse and broad membership throughout Colorado; that represents the majority of beef cattle production, private land ownership, state and federal lands grazing, businesses, and those who advocate for the industry,” said Todd Inglee, President of CCA. “Members gathering to discuss issues and engage in policy development is the purpose of this organization,” Inglee continued.

On Tuesday evening, January 16th during the Colorado Cattlemen’s Foundation Banquet, awards were presented to individuals who have made a significant impact on the industry:

Law Officer of the Year
Chris Johnson was named Law Officer of the Year for 2017. He has been an advocate for the cattlemen and the livestock industry in his nearly 39 years as a law enforcement officer in Colorado. During both his service as a Sheriff in Otero County, and recently, as Executive Director of the County Sheriffs of Colorado; he has promoted livestock theft prevention and enforcement within the ranks of the Colorado Sheriff Departments – and in other law enforcement agencies, as well. Under his leadership as the Executive Director of the County Sheriffs of Colorado, livestock theft prevention and enforcement training has been ongoing for all new and current Sheriff Department Officers. CCA celebrates his efforts and commitment to serving the beef producers of Colorado.

Brand Inspector of the Year
The 2017 Brand Inspector of the Year is Brad Ocker, in appreciation of nearly 20 years as a brand inspector who has exceptional work ethics, integrity and livestock-handling abilities. Brad has been commended for his skills in treating livestock owners as a priority, and in a timely and professional manner. Brad Ocker was involved in one of, it not Colorado’s biggest, cattle theft cases. As a result of his hard work, cattle belonging to nine livestock producers in Moffat and Routt Counties were recovered and returned to their owners. Even with his region covering over five thousand acres, Brad does a great job scheduling and traveling to inspections. CCA, the local Moffat County Cattlemen’s Association affiliate, the Colorado State Board of Stock Inspection, and livestock owners in his area applaud Brad’s dedication that he has shown to his position and to the producers of northwest Colorado.

Outstanding Service Award
Christe Coleman with the Colorado Division of Homeland Security is CCA’s 2017 Public Servant of the Year. Through her close work with the Colorado Department of Agriculture—State Veterinarian’s Office during the wildfires in the south-central area of the state, Christe demonstrated her commitment to Colorado beef producers. Christe played a key role for local ranchers, the local sheriff, emergency managers, and the U.S. Forest Service incident management team to help solve problems of agricultural land access during those fires. She also helped to protect ranchers’ operations, land, and cattle. She served as a great liaison between the ranching community and the incident management team that was mitigating the wildfire issues. After these fire events, she has taken the time to give presentations to the Colorado Emergency Management Association, and at other ag-related meetings including CCA’s Committee goal-setting meeting. These presentations will help develop solutions for the future so that emergency management personnel will better understand ranchers’ concerns, and to help ranchers better understand how incidents are managed and how they can get involved. CCA truly appreciate Christe’s efforts and the example she has set and sincerely looks forward to working with her into the future.

Landowner of the Year
The Colorado Parks and Wildlife presented the Landowner of the Year Award to Bobby and Dottie Hill. The Hills have always been strong supporters of conservation through sportsmen activities and habitat management on their ranches. They have also been passionate about private property rights for the benefit of the resource… while at the same time, creating opportunities so that the public can interact on their lands. The Hills have had open dialogue about livestock grazing and using livestock as a tool to manage vegetative communities in outcome-based ways. They have engaged in local communities and with local landowners. This interaction isn’t necessarily always available from landowners. In the Hill’s case, it has served their property management and those around them well.

Outstanding Commercial Producer of the Year
The 2017 Outstanding Commercial Producer of the Year is the Schramm Feedlot of Yuma, CO. Schramm Feedlot is a 28,000 head feedlot located in Yuma, CO. Schramm Feedlot, owned by Tom and Diane Holtorf, has embraced beef industry changes over the past 20 years in a manner that has allowed them to expand from a beginning 8,000-head facility covering 90 acres, to their current size which occupies an additional 80 acres. The Holtorf’s dedication to their local community through the Yuma County Cattlemen’s Association Fed Contest Calcutta is evident, as they have been involved since the start. This contest allows local producers to enter animals and through the contest receive feedlot and carcass performance data on those animals. They have also been actively involved at the state level, engaging in issues such as air and water quality affecting small and medium sized feedlots.

Outstanding Seedstock Producer of the Year
The T-Heart Ranch, owned and operated by Shane and Beth Temple of Center, CO is the 2017 Outstanding Seedstock Producer of the Year. Shane and Beth Temple had a humble start when they purchased 30 commercial cows in 1995 to today having a 2800 head ranching operation and feedlot near Center, CO. T-Heart Ranch currently maintains the registered Simmental and SimAngus cowherd to produce their replacements, and the registered SimAngus bulls for their annual High Altitude Bull sale held each March. The historic L-Cross ranch runs a mostly commercial cowherd of Angus and SimAngus cattle to produce bred replacement females that they market each December through the High-Altitude Female Sale. They are located in the high elevation of the San Luis Valley where their feedlot is at 7680 feet, so the Temples are very conscious of High Altitude Disease. Since the heritability for this disease is high, they are carving out a market needing genetics that can survive the harsh conditions of high elevations. Shane and Beth Temple, as well as their four children, Shelby, Lindsey, Ashley and Coy; are a genuine ranching family and run an impressive operation.

Cattle Woman of the Year
The 2017 CattleWoman of the Year, Geraldine (Gerrie) Colette of the Fremont County Cattle Women, has been a part of the CattleWomen since 1990. She is passionate about the beef industry and constantly represents CattleWomen in a variety of venues. Besides being part of their group’s projects and fundraising for scholarships, she has held the offices of President, Treasurer and Reporter. She also served as State CattleWomen Quarter Representative for Southeastern Colorado. Currently, she is reporter and the leader for Fremont County CattleWomen’s educational outreach; which includes representing Fremont County CattleWomen on the Mini College Planning Committee for Pueblo Community College, as well as spear heading their elementary classroom presentations. She has done cattle presentations in Fremont County at the local schools for 2nd and 4th grade students for the past 17 years and her records show the number of students educated has raised to around 1000 each year.

CattleWoman Rookie of the Year
Colorado CattleWomen’s 2017 Rookie of the Year is Chandra Fisher of the Lincoln County CattleWomen. Chandra came into this group with enthusiasm and ideas. She not only has ideas, but also is willing to carry through with the projects and ideas. With new membership, the Lincoln County CattleWomen decided to print their booklet with by-laws and activities, which they had overlooked for many years. She volunteered to put the book together and have it printed. After being appointed Fair Chairman at the beginning of the year, she presented several ideas and the group came up doing several items at their fair. The group agreed that although she has only held one chairmanship in the year, her effort and work did more to promote beef in her county than they had done in the last 10 or more years. She continues to be a promoter and has enthusiasm for the industry.

Affiliate Rate-of-Growth Contest
Colorado State University Collegiate Stockergrower’s achieved the highest rate of growth this year. Their recruitment efforts earned them an affiliate-hosted community BBQ! Gene Dubas with Dubas Cattle out of Fullerton, Nebraska has generously donated a $5,000 certificate toward a Silencer chute to the association. CCA will hold an auction for the chute, and the proceeds will be used to fund the BBQ for CSU Collegiate members and its citizen guests from the surrounding community. 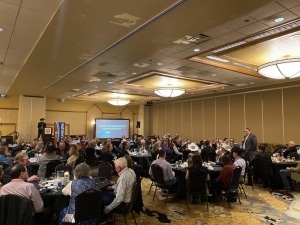 ARVADA, Colo. – It was a busy two days for Colorado Cattlemen’s Association’s (CCA) at the 2022 Mid-Winter Conference, which wrapped up earlier this week at the DoubleTree Hotel in Denver. After a virtual 2021 event, it was great to return to business and tackle issues and opportunities facing the industry.  The event was full […]