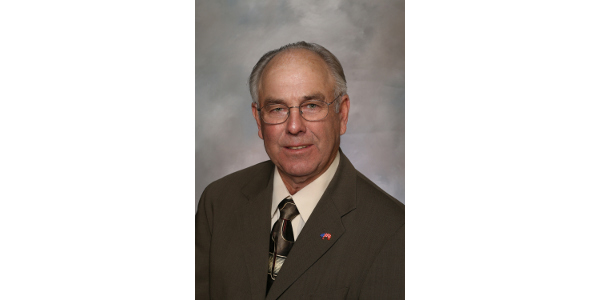 Curtis Meier of Clarinda received the president's gavel from 2016 President Al Wulfekuhle of Quasqueton at the conclusion of IPPA's annual meeting in Des Moines on Jan. 24. (Courtesy of Iowa Pork Producers Association)

CLIVE, Iowa — A long-time Page County pork, beef and grain farmer has embarked on his second one-year term as president of the Iowa Pork Producers Association.

Curtis Meier of Clarinda received the president’s gavel from 2016 President Al Wulfekuhle of Quasqueton at the conclusion of IPPA’s annual meeting in Des Moines on Jan. 24. Meier is believed to be the first, two-time president in the association’s 82-year history. He first served in the role in 2003.

“It’s a great opportunity, not one I really asked for, but things just fell in place,” Meier said. “I never dreamed I’d have another chance at it. We have a strong and knowledgeable board of directors and I look forward to working with the board in the coming year to address the issues, achieve our goals and improve the success of the state’s producers.”

Meier and the IPPA Board of Directors will be focused on trade, the Veterinary Diagnostic Laboratory at Iowa State University and conservation.

Pork exports closed 2016 with increased strength after a slow start and trade missions and market development will continue to be key in 2017, said Meier. IPPA will continue to do its job of promoting pork and creating markets with the help of the Iowa Economic Development Authority, the National Pork Board and the National Pork Producers Council.

“I went to Viet Nam in 2003 and wondered what we’re doing here because these people are so poor, I don’t think there’s a market here,” Meier recalled. “Today, it’s an up and coming market. When people get a little bit of money in their pocket, the first thing they look for is a protein source in the diet and that’s where we come in. We have a great protein source in pork. Every Asian market we can develop is big for [pork producers].”

Iowa State University is seeking a $100 million appropriation from the state of Iowa to fund an 83,000 square-foot addition and renovation of 27,500 square feet of the existing College of Veterinarian Medicine’s Veterinary Diagnostic Laboratory. ISU will supply $4 million of the necessary funding and seek another $20 million in private gifts. IPPA has already promised $1 million for the facility and Meier says the association will continue pushing for the state funding.

“The organization needs to support the vet lab. The pork industry relies heavily on the lab’s services and we will emphasize the importance [of the funding] in the coming year. We need to talk to our state legislators to let them know how critical it is to our industry,” he said.

As a Page County soil and water commissioner, Meier knows the importance of caring for our natural resources and he will continue encouraging producers to install new nutrient loss reduction technologies wherever possible.

“Even with times as tough as they are, people are still concerned about conservation and are willing to spend money on cover crops, terraces, waterways, CRP, etc., Meier said. “We want to continue strong support for conservation as an organization.”

Meier and his wife, Brenda, along with their son and son-in-law, have a diversified farming enterprise. The family has a 160-sow farrow-to-finish swine business, 1,100-head of beef cattle and 3,000 acres of corn and soybeans.

IPPA serves all Iowa hog farmers through the Pork Checkoff and is an industry-inclusive organization whose mission is to provide a unified voice to promote and educate for a sustainable, socially responsible, profitable and globally competitive pork industry.