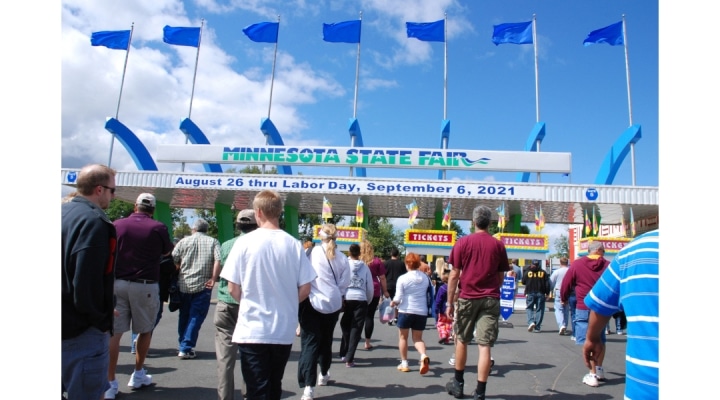 ST. PAUL, Minn. — The Minnesota State Fair overcame significant challenges to return in 2021 after being canceled the year before, said State Fair General Manager Jerry Hammer during the 163rd Annual Meeting of the Minnesota State Agricultural Society. The Society is the governing body of the State Fair, and its annual meeting was held Jan. 13-16 at the DoubleTree Hotel by Hilton in Bloomington.

“Uncertainty about whether there would even be a fair in ’21 lingered into May, creating a significantly compressed time frame in which to produce what is normally one of the largest and best-attended events in the world,” Hammer said. “The severe labor shortage, supply chain issues, lack of time to obtain thousands of commitments needed and security concerns were just a few of the myriad hurdles to clear,” Hammer continued.

“The reemergence of the virus late in the summer created further complications,” Hammer added. “Concessionaires, vendors, suppliers, entertainers, competitive exhibitors, volunteers and many other participants were all affected.”

Hammer credited the State Fair’s staff and tens of thousands of participants for overcoming long odds to present what was one of North America’s best-attended events of ’21. “The fact that we were able to produce a great fair for 1.3 million guests was miraculous,” he added.

Hammer stressed the importance of the State Fair to Minnesota through its huge social and economic impacts. According to a 2018 study, the State Fair annually generates nearly $300 million in economic impact in the Twin Cities, plus additional unmeasured impact throughout the state. Included are more than 12,000 jobs and job equivalents generating nearly $77 million in wages. “The social impact is just as important,” Hammer said. “The fair is the only place where all of us celebrate the very best of our state and of each other. We needed the fair more than ever in ’21.”

Additionally, Hammer said that during the past two decades, the Society had invested nearly $200 million in the facilities and infrastructure of the historic State Fairgrounds – all with no public funding of any type.

During the meetings, the State Fair reported an operating loss of $1.3 million for 2021. That follows a $16.5 million operating loss in ’20 when the fair was canceled. Planning for the ’22 State Fair is underway as the fair continues rebuilding its operation.

Also at the meeting, the fair’s board of managers approved admission prices for the 2022 fair, Aug. 25 through Labor Day, Sept. 5. Regular gate admission for adults 13-64 is $17; kids 5-12 and seniors 65+ are admitted for $15; children 4 and under are always admitted free. The fees represent a $1 increase in each category from 2021 and take effect Feb. 1. Pre-fair discount admission tickets are currently on sale through Jan. 31 at mnstatefair.org at the 2021 discount price of $13 for all ages. For a complete list of pricing, visit mnstatefair.org/tickets/

Jim Sinclair, the State Fair’s recently retired deputy general manager of sales and exhibits, is the newest member of the Minnesota State Fair Hall of Fame. Sinclair’s 46-year career at the State Fair included management of the fair’s commercial exhibit space, food and beverage concessions as well as amusement rides and attractions. Sinclair is also the architect of the State Fair’s renowned independent Mighty Midway. He has held a variety of leadership posts in the industry, including the International Association of Fairs & Expositions. He was inducted into the IAFE Hall of Fame in November ’21. The State Fair’s Hall of Fame was founded in 1966 to recognize individuals whose outstanding service has had a lasting impact on the Great Minnesota Get-Together.

The State Agricultural Society is made up of delegates from each of the state’s 87 county fairs, plus representatives of 44 statewide associations involved in agriculture, horticulture and education. The Society is charged exclusively with the production of the annual Minnesota State Fair and management of the historic 322-acre State Fairgrounds.

Agriculture Marketing and Promotions Advisory Board to Hold Virtual Meeting June 3
May 26, 2022