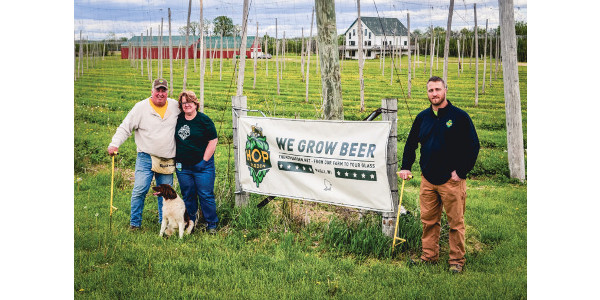 MADISON — Hobbies turned to new business dreams when skyrocketing hop prices in 2008 were the talk of the up-and-coming Wisconsin craft brewing industry. The launch pad was set for the development of several new business ventures for Green County Farm Bureau members Rich and Michele Joseph.

Rich grew up working with family in tobacco fields and sugar bushes near La Farge, making hay and milking cows near Hillsboro and brewing his own beer with homegrown hops because it was a natural extension of, “making your own and self-reliance.”

The interest in homegrown hops and brewing beer continued after the couple married and moved to Belleville. Rich grew some hops in the couple’s backyard for his homebrew and after noticing the increase in hop prices, he researched the hops growing process. After careful consideration, the couple purchased 25 hop rhizomes, for a test plot at Michele’s father’s farm in Neosho, about 12 miles north of Oconomowoc.

In 2010, after designing a successful test plot, the family rented and prepared a two-acre plot at the same location.

“There are two key factors in growing hops,” says Rich, who at the time was a regional sales manager for ACG Products, a global company that imports and exports animal feed products. “A sandy silt loam soil is best and high-quality water supply – one hop plant can use up to five gallons of water per day during a sunny, summer day.”

Rich explained that the initial investment was $8,000 to $10,000 per acre along with setting up the trellis structure and irrigation.

“We saved some investment by cutting our own black locust trees and using them for poles,” said Rich. “Another savings was having our four children involved in the labor-intensive process.”

Following the design of Matt Sweeny, who operated Simple Earth Hops, a quarter-acre sustainable plot that is used for education, research and demonstration north of Dodgeville, Rich and his family prepared the soil, constructed the trellis structure, planted the rhizomes and installed the irrigation system.

Michele laughed and said that as the process grew, “we were just winging it – a constant MacGyver kind of thing.”

The distance between Belleville and Neosho became too great with the constant attention the plants needed and made it impractical to continue the Neosho hop yard so they started looking for their own land closer to Belleville.

“During this time while talking with other small-scale hop producers, a few of us decided to pool our resources,” said Rich. “In 2010, we started another venture, the Wisconsin Hops Exchange, with assistance from staff with UW’s Center of Cooperatives.”

In 2013, Rich and Michele purchased land south of Belleville where they designed and developed a 7.5-acre plot for hops, using the plants from Neosho for their new hop yard in Belleville. The Hop Garden Farm was created.

“While selling hops to breweries across Wisconsin, several brewers suggested to Rich that he should start his own brewery because of his beer industry knowledge,” said Michele.

That was the start of the next venture, Hop Garden Brewing LLC. Rich was out selling hops, developing the brewing process and sons Joe and Jake were building the hop yard.

“Our first beer was launched in January of 2013,” said Rich. “And then grew to three labels and was on shelves at dozens of local stores.”

Then the bottom dropped out of the hop market.

“What happened to the hops industry is very similar to what happens in the dairy industry,” added Rich. “Prices go up, users are pushed into contracting, large producers put in tens of thousands more units and here in Wisconsin, we tripled our production but that still is only a hundred or so acres. Then there is a glut in the market and the users dump their contracts and prices plummet.”

In 2015, with depressed hop prices, Rich and Michele started the Hop Garden Brewing Tap Room on the banks of the Sugar River in Paoli that hosts local musicians and features Hop Garden’s beers that are now brewed at Brewfinity Brewing Company in Oconomowoc.

Rich added that the growth in craft beer is starting to slow and that store shelves are crowded with lots of labels from all around the country.

“You are starting to see some small beer producers go out or get bought up by larger breweries,” said Rich. “We believe that with our diversification and vertical integration, we can continue our growth at a steady rate.”

Currently, the Josephs are working with a Madison brewery to brew and can their beer in 12-ounce cans for this summer and relaunch into the Wisconsin market.

“The vision we had in 2008 was to be simple hop growers,” added Rich. “Then we added beer production, then Tap Room owners, and now we’ve added a kitchen specializing in barbecue to the Tap Room. I guess the old saying is true, ‘It’s not what you do with Plan A, it’s what you do with Plan B, C, D and E.’”