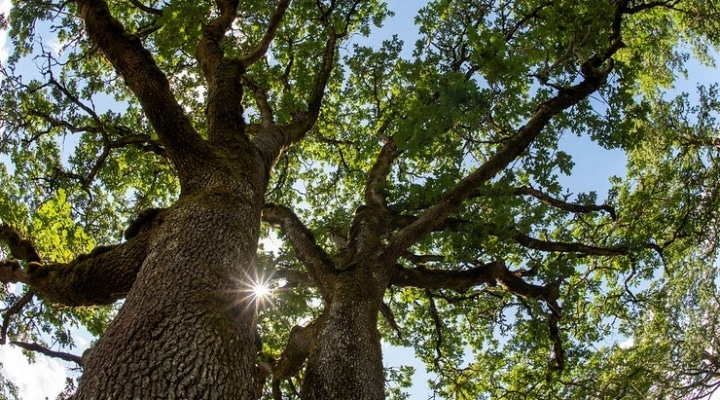 The MOB is an ambrosia beetle native to Europe, the Middle East, and North Africa, where it primarily attacks oak species.  MOB attacks at least 12 species of oaks.  In California, it has been found infesting two species of white oak; most commonly valley oak and, to a lesser extent, blue oak. (Colin Durfee, Flickr/Creative Commons)

The survey is part of California’s pest prevention system that protects our agriculture and natural resources from non-native invasive species.  Early detection plays a key role in successfully controlling an infestation before it can spread to nearby areas.  To date, the area generally infested by MOB includes Pope Valley on the east; Seigler Mountain on the north; Calistoga on the south; and Knights Valley on the west.  The primary infestation is in the Calistoga area.

The extensive survey, also known as a delimitation survey, consists of multiple Mediterranean oak borer traps placed outside of find sites.  As beetles are trapped, traps are moved further away in order to see how far it has spread.  To date, the MOB has been detected in Lake, Napa, and Sonoma counties with two detections in Contra Costa county in 2018.  The Contra Costa MOB detections were at a wood collection facility that included firewood.  Firewood is a pathway that can artificially spread the pest to other areas; we urge the public to “Buy It Where You Burn It, Don’t Move Firewood.”  Visit www.firewood.ca.gov to learn more.

The MOB is an ambrosia beetle native to Europe, the Middle East, and North Africa, where it primarily attacks oak species.  MOB attacks at least 12 species of oaks.  In California, it has been found infesting two species of white oak; most commonly valley oak and, to a lesser extent, blue oak.  A single, very limited attack was found in a severely distressed California black oak.

MOB creates tunnels (or galleries) in the trunks and branches of host trees while continuing to multiply.  It initially attacks the crown of the tree, where it will kill individual limbs.  Infestation can continue over several growing seasons, eventually invading the main trunk and killing the entire tree.  Infested trees become hazards when widespread tunnels undermine the strength of limbs, making limbs susceptible to falling.  Additionally, MOB beetles grow fungi inside their tunnels and use it for food for larvae and adults.  Some of the fungi may be pathogenic and cause tree decline, structural failure, and in some cases tree death.

If you have a tree that you believe to be infested, please contact the appropriate agricultural office below and take the following steps to help stop the spread of MOB:

• Moving infested wood artificially spreads the pest to other areas.  Buy it Where You Burn It, Don’t Move Firewood. www.firewood.ca.gov
• Chip infested wood as small as possible (1-3 inches in diameter chipped pieces).
• Solarization of both chips and logs is recommended.  Cover the wood with sturdy plastic (clear if possible) and leave in the sun for six weeks (summer) to six months (winter).  Make sure the chips or logs (and beetles) are fully contained by wrapping the plastic sheet fully underneath and over the material and place soil or rocks to secure the edges.

Federal, state, and county agricultural officials work year-round, 365 days a year, to prevent, deter, detect, and eliminate the threat of invasive species and diseases that can damage or destroy our agricultural products and natural environment.  These efforts are aimed at protecting California’s natural environment and keeping our food supply plentiful, safe, and pest-free.