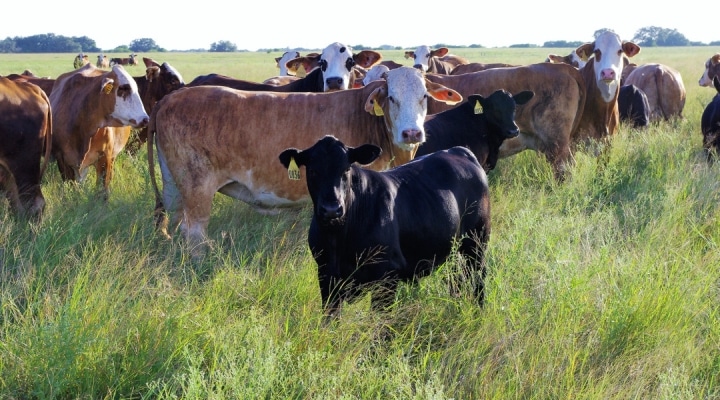 Bos indicus cattle, such as these, lag in their reproductive efficiency, something researchers are trying to help fix with a recent medical breakthrough. (Texas A&M AgriLife photo by Rodolfo Cardoso)

Bos indicus cattle breeds are very important to global beef production due to their adaptability to tropical and sub-tropical climates, including those found in Texas and other southern U.S. states.

But a big challenge or disadvantage for Bos indicus, or Brahman, cattle is that their overall reproductive performance is inferior to that of Bos taurus cattle breeds such as Angus and Hereford, which predominate in the Midwest and Northern states.

Rodolfo Cardoso, DVM, Ph.D., assistant professor and reproductive physiologist in the Department of Animal Science of the College of Agriculture and Life Sciences, is leading a four-year project funded by a $500,000 grant from the U.S. Department of Agriculture, USDA, National Institute of Food and Agriculture. Among the collaborators are Gary Williams, Ph.D., Texas A&M AgriLife Research professor emeritus, and graduate students Viviana Garza and Sarah West.

Cardoso said revolutionary advances in neuroendocrine research have defined the mechanisms controlling the secretion of gonadotropin-releasing hormone, GnRH. The new insights, he believes, can help his team determine neuroendocrine differences between Bos taurus and Bos indicus genotypes of cattle and use that to enhance reproductive efficiency in Bos indicus-influenced cattle.

“Very recently, there was an important breakthrough on the understanding of how the secretion of GnRH is regulated in rodents and primates,” he said. “Our preliminary research suggests that similar mechanisms are also important in cattle and could explain the differences in reproductive performance between Bos taurus and Bos indicus animals.

“If confirmed, those findings can have practical implications to reproductive management of Bos indicus cattle. In human medicine, several pharmacological strategies to improve fertility in women have already been developed based on these novel findings.”

As many as 70% of the world’s cattle are raised in tropical and sub-tropical regions, and approximately 30% of U.S. beef herds have some Bos indicus influence, particularly in the southern and southeastern regions.

“That five-month delay makes them not reach puberty in time for their first breeding season, and so they have to wait another whole year to be bred and have their first calf,” Cardoso said.

With more than 4 million replacement beef heifers entering the U.S. cow herd annually, the difference between having a calf when the heifer is 2 versus 3 years old can make a big difference in beef production. In Texas and Florida, less than 50% of beef heifers reach the goal of calving at 2 years old due to the Bos indicus influence.

This project will utilize the recent discoveries to determine whether distinct differences observed in reproductive function in Bos indicus and Bos taurus breeds can be attributed to functional differences in the brain area that controls the secretion of the GnRH hormone.

A predetermined breeding season typically lasts between 45 to 90 days and allows for more efficient management of a beef cattle operation, Cardoso said.

“You can have a very uniform calf crop, which makes it much easier to manage those calves — vaccinate and do all the health protocols at the same time,” he said. “You can wean and sell the calves at the same time because you have a uniform group, so it makes management much, much more efficient in a cow-calf operation. It also allows for culling of animals that are not efficient.”

In addition to better understanding the cattle’s reproductive function, Cardoso said, a second goal from a pharmacological strategy is to develop synchronization protocols for artificial insemination tailored to Bos indicus heifers. Most protocols currently used in the U.S. were developed specifically for the Bos taurus breeds.

“These Bos indicus heifers already have, at 12-14 months of age, the skeletal size and maturity required to support a safe and healthy pregnancy,” he said. “There’s no question about that. They’re just not cycling yet. We don’t want to induce these heifers to reach what we call precocious puberty (puberty before 10 months of age). That’s not desirable, and that’s not what we’re trying to accomplish here.”

A key benefit, Cardoso said, of synchronizing the breeding season more efficiently is being able to use artificial insemination more in Bos indicus-influenced cattle.

But currently, breeders’ ability to synchronize estrus of Bos indicus-influenced animals for artificial insemination is not optimal, Cardoso said.