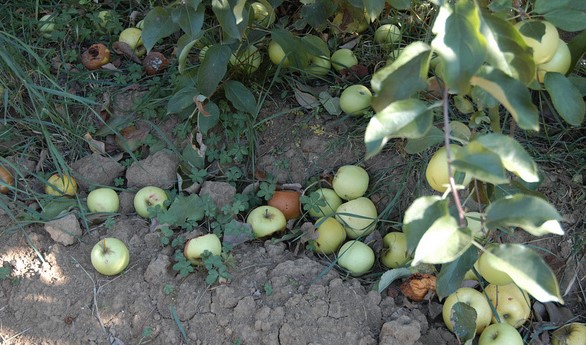 The Medfly is known to target more than 250 types of fruits and vegetables, potentially causing severe impacts on California agricultural exports and backyard gardens alike.  Damage occurs when the female lays eggs inside the fruit.  The eggs hatch into maggots and tunnel through the flesh of the fruit, making it unfit for consumption. (Louise Potterton / IAEA; IAEA Imagebank, Flickr/Creative Commons)

SACRAMENTO — The California Department of Food and Agriculture (CDFA), the United States Department of Agriculture (USDA) and the Solano County Agricultural Commissioner’s office have eradicated a Mediterranean fruit fly (Medfly) infestation centered in and around the City of Fairfield, ending a 108-square-mile quarantine that began September 25, 2017.  A total of ten flies were detected.

CDFA used the release of sterile male Medflies at a minimum rate of 500,000 flies per square mile per week as the mainstay of its eradication measures for this pest.  Additionally, properties within 200 meters of the detection sites were treated with an organic formulation of Spinosad, which originates from naturally-occurring bacteria in soil, to eliminate any mated females and reduce the density of the population.  To further reduce the population, properties within 100 meters of breeding populations were subject to host fruit removal to eliminate eggs and larvae.  During this incident, over 2,098 pounds of fruit were removed from 58 properties.

The sterile fly release program has a proven track record of eradication in California.  Sterile male flies mate with fertile female flies in the natural environment but produce no offspring.  The fly population decreases as the wild flies reach the end of their natural life span with no offspring to replace them, ultimately resulting in the eradication of the pest.  The sterile male Medflies are brought to California by the joint CDFA/USDA sterile insect rearing facility in Los Alamitos, California, which prepares sterile flies for release everyday over California.

USDA, CDFA and the Solano County Agricultural Commissioner acknowledge and thank local area residents for their cooperation in preventing the movement of backyard fruit and allowing property access to perform critical eradication activities.  Working together, we rid California of this invasive species.

“Fruit flies are dangerous pests for California farming and backyard gardens,” said California Department of Food and Agriculture (CDFA) Secretary Karen Ross.  “I would like to thank farmers and other residents of Solano County who helped us eradicate this infestation by cooperating with the quarantine.”

Solano County Agricultural Commissioner Simone Hardy added, “I would like to thank the residents of Fairfield and Suisun for their support of the projects trapping, surveying, treatments, and fruit removal efforts and to the growers impacted by the quarantine for their efforts and collaboration that resulted in the eradication of the Medfly from our county.”

The Medfly is known to target more than 250 types of fruits and vegetables, potentially causing severe impacts on California agricultural exports and backyard gardens alike.  Damage occurs when the female lays eggs inside the fruit.  The eggs hatch into maggots and tunnel through the flesh of the fruit, making it unfit for consumption.

While fruit flies and other pests that threaten California’s crops and natural environment are sometimes detected in agricultural areas, the vast majority are found in urban and suburban communities.  The most common pathway for these pests to enter the state is by “hitchhiking” in fruits and vegetables brought back illegally by travelers as they return from infested regions of the world.  Help protect California’s agricultural and natural resources; please Don’t Pack a Pest (www.dontpackapest.com) when traveling or mailing packages.

Thinking about going into the cattle business?