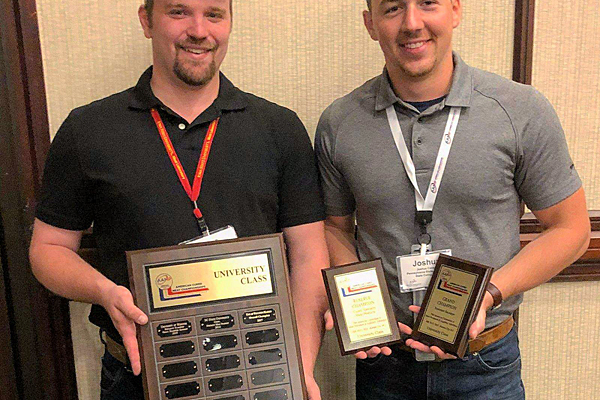 The ACMC competition is a venue where meat processors from across the United States have their products evaluated and scored for a variety of sensory attributes. This year over 600 members representing 160 meat processing establishments attended, and 70 members entered 680 products for judging in 29 separate meat product categories.

To expand learning opportunities for students, Penn State Extension Meat Specialist Jonathan Campbell, Ph.D., initiated the University Class competition four years ago for both undergraduate and graduate student teams to compete against other meat science programs from around the country.

“This national recognition is a wonderful honor for these students, as well as for Penn State,” said Dr. Terry Etherton, head of the Department of Animal Science. “It is an important affirmation of the value and quality of our meat science program. In addition to congratulating the students I would like to thank the faculty and staff who prepared them so well.”

“Students entering this competition gain valuable knowledge about meat processing through their interactions with meat processors, faculty and fellow students from all over the U.S.,” Campbell said. “The creation of the ‘University Class’ provides students with an opportunity to create new or innovative meat products to be evaluated by the same standards and guidelines by which other products entered in the ACMC are measured.” It takes several months to develop the products.

Campbell credits the Penn State Meat Laboratory’s Glenn Myers, manager, and Dave Weaver, assistant manager, for providing these students with the opportunity and environment conducive to the successful development of these award-winning meat products.

Ethnobotanist gets grant to improve conservation of Pa. medicinal, edible plants
May 19, 2022