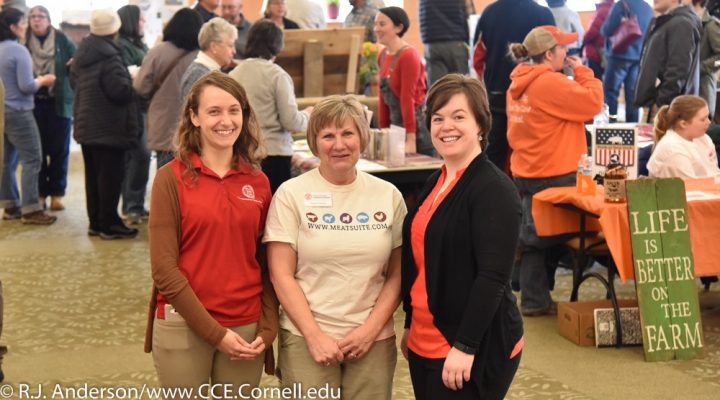 GENEVA, N.Y. — When it comes to shopping for meat, more consumers are looking for products raised locally. Many of those consumers, however, have trouble connecting with nearby farms to satisfy their buying preferences. Looking to break down that barrier in upstate New York was the inaugural Meat & Greet Farmer and Chef Fair.

Held March 11 at Hobart and William Smith Colleges in Geneva, New York, the event was a collaboration between Cornell Cooperative Extension (CCE) and Hobart and William Smith Colleges’ Finger Lakes Institute. Also sponsored by the Meat Suite Project and Finger Lakes Culinary Bounty, the event brought together more than 20 farms and well over 100 consumers, including home cooks, professional chefs, restaurateurs and food distributors.

When Kyli Knickerbocker, co-owner of Firestone Farms in Livonia, New York, first heard about the Meat & Greet Fair, she was quick to sign on as vendor. In taking advantage of the networking opportunity – both with consumers and fellow farmers – she and her partner, Jake Stevens, appreciated having a much-needed forum to explain and promote their farm’s value-added agricultural practices.

I think communities do a great job supporting local vegetable farmers,” said Knickerbocker, who raises beef, poultry and heritage breed hogs along with vegetables and herbs. “However, for whatever reason, consumers aren’t quite as confident taking the plunge to buy meat from local farms.”

Having a positive story and access to an audience, she said, is essential for overcoming that barrier.

At our booth, we saw a steady stream of consumers from the area who wanted to hear about our pasture-raised livestock and our farm,” said Knickerbocker, also a high school math teacher. “It goes a long way when we’re able to explain and show the care we put into our animals and the sustainable practices we use, such as supplementing feed with scratched or bruised produce from our fields and local grocery stores, and how we work with local breweries and distilleries to reuse their spent brewer’s grain for cattle and pig feed.”

“Producers do a great job of taking care of their animals and the day-to-day things, but marketing often does not always come naturally to those folks,” said Glazier. “But it is so important that farmers get out and let consumers get to know them. There is no one better positioned to tell an animal’s and farm’s story than the farmers themselves.”

In addition to the display booths manned by farmers from around the region, the Meat & Greet Fair featured cooking demonstrations from four local chefs using products provided by event vendors. Scott Riesenberger, chef at Ravinous Kitchen at Ravines Wine Cellars in Geneva, who prepared fried duck and waffles using fowl from Ox Creek Farm in Canandaigua, New York, recently moved back to the area after 17 years cooking in and around New York City. He told the crowd that in culinary circles, duck from the Finger Lakes region is recognized as the best in the northeast.

That day marked the first time he had cooked with a duck from Ox Creek Farms. “It was a great opportunity for chefs like me to get exposed to new producers from around the area that we otherwise might not,” Riesenberger said. “My restaurant focuses on incorporating local ingredients into our menu, so making these connections is ideal.”

Despite being held on a snowy, bitter-cold day, organizers said the Meat & Greet exceeded all expectations. “Attendance was great and we got tremendous feedback on the networking aspect,” said Glazier, who spearheaded CCE’s efforts along with Marie Anselm, agriculture economic development specialist. “Driving the event’s success was the collaborative effort between CCE and the Finger Lakes Institute at Hobart and William Smith Colleges. We at extension have the farmer connections and my co-organizer Sarah Meyer from the Finger Lakes Institute has a rich network of restaurants that she called on. It was a successful recipe.”