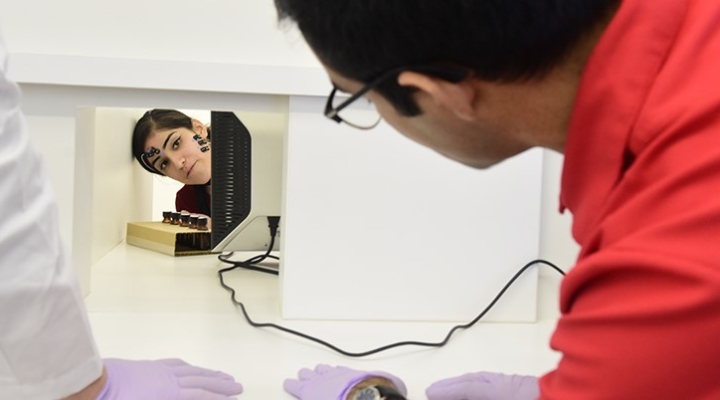 FRESNO, Calif. — Winemaking involves a lot of science, but finding out whether someone likes a specific kind of wine or not often involves just one sip and a few questions.

Traditionally, consumer reaction to wine is measured with a rating system tied to a question. For example, on a scale from one to nine, how much do you like this wine?

Fresno State researchers and undergraduate students are now taking it a step further to capture actual data. They are studying people’s physiological reactions to wine aromas using technology that can record facial muscle movements, the sweat on fingertips, respiration cycles and heart rate.

Such data has not been recorded or included in the scientific literature of wine before, said Dr. Miguel Pedroza, assistant professor of enology in the Department of Viticulture and Enology at Fresno State.

“Wine is a very emotional beverage,” Pedroza said. “Historically, mankind has been attracted very heavily to wine, and we believe that this is due to the aromas which might be the link between emotions and wine. We want to understand a bit more how our body reacts.”

Several hundred aroma molecules can be found in a single bottle of wine, but people can accurately identify only about a handful through smell. The idea is to identify the smells that are perceived, in a positive or negative way, using body signals, he said.

Pedroza is collaborating with three other professors in the Food Science and Nutrition, Psychology and Computer Science departments. The two-year project is funded through the Agricultural Research Institute from the California State University system.

Testing is conducted in the sensory lab at the Jordan Agricultural Research Center, where participants are hooked up to small electrodes to record body signals and given aromas (or odors) to smell, such as rose, clove or spices.

The electrodes can detect the slightest movements, like the start of a frown, which usually indicates something one doesn’t like, or a smile indicating something one does like, said Dr. Martin Shapiro, professor of psychology, who specializes in decision making and has a physiology lab that measures responses in the body. Heart rate levels and sweat can tell about arousal levels and stress, he said.

Information collected from the aroma tests are uploaded into a database where computer science professor Dr. Hubert Cecotti helps the research team process the information.

Dr. Carmen Licon-Cano, assistant professor in food science and nutrition, is excited to continue the work she started in her post-doctoral studies.

The goal is to create a database identifying the molecules that most often give a positive bodily reaction so “maybe the winemaker or cheesemaker or whoever is processing food can make it a target to include these specific compounds in their wine or product,” she said.

The project will be conducted in three phases. Thirty participants are needed in each phase. To volunteer to participate in this or other sensory research projects, visit the Olam Sensory Laboratory website to sign up.