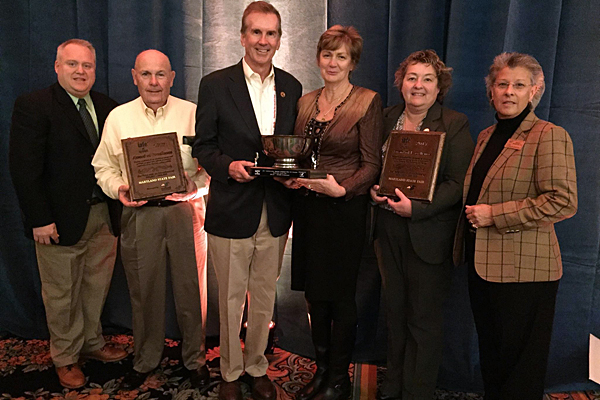 TIMONIUM, Md. — The 2017 Maryland State Fair struck it rich this week, winning five top awards, among them a Best of Division Award, at the International Association of Fairs and Expositions Striking It Rich Convention in Las Vegas. The IAFE annually awards excellence in fair programming through four educational contests: Agriculture, Competitive Exhibits, Communications and Sponsorship. Fair members submit their ideas and programs to be judged by IAFE member representatives and professionals from respective fields.

“This is a proud time for the Maryland State Fair staff that works hard year-round to present high-quality, fun and educational entertainment events for hundreds of thousands of fairgoers each year,” said Maryland State Fair Assistant General Manager Becky Brashear.

The IAFE 2017 Convention Striking it Rich theme, in addition to focusing on excellence in local, national and international fair programming, embarked on an initiative that highlighted the positive impact and relevancy of scholarship monies raised and awarded by the industry. The Maryland State Fair alone awards $35,000 in scholarships annually to Maryland residents.

“The millions, more than $43 million at last count, of scholarship dollars that have been and will be awarded by the local, national and international fair industry to individuals for continuing education is an investment in the community, but more importantly, an investment in the citizens of our world,” Brashear said. “The youth we serve today will become our leaders tomorrow.”

1st Place: Newly Established or Evolving Program/Exhibit that promotes agriculture to the fair-going public category. The Maryland State Fair Innovation Station showcased Science, Technology, Engineering and Math and its connection to agriculture. The exhibit featured a green wall, a butterfly encounter, a planetarium, an interactive kiosk and displays that covered food safety, GMO’s, Ethanol and technological advances in agriculture.

The upcoming 137th Maryland State Fair will run from Aug. 23 to Sept. 3, 2018. For more information, go to www.marylandstatefair.com.

Five steps to get NRCS assistance