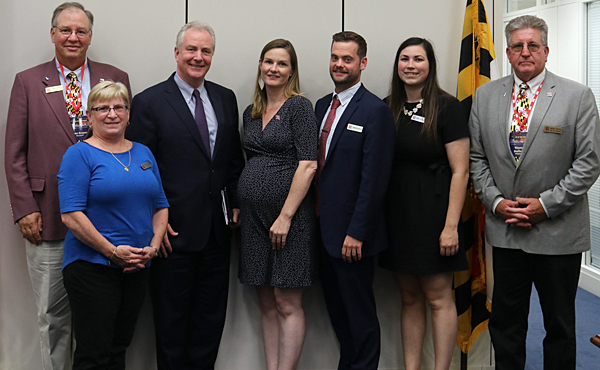 Farm Bureau members met with several members of Congress this past week to discuss issues including the U.S.-Mexico-Canada Agreement for trade, the need for agricultural labor reform, and increasing access to high-speed internet in rural areas. (Maryland Farm Bureau)

WASHINGTON — Farm Bureau members met with several members of Congress this past week to discuss issues including the U.S.-Mexico-Canada Agreement for trade, the need for agricultural labor reform, and increasing access to high-speed internet in rural areas.

A roundtable meeting with Rep. David Trone was held June 7 at Ernst Grain & Livestock in Clear Spring, Md. The meeting was planned in partnership with the Maryland Department of Agriculture.

Representatives urged members of Congress to take action and ratify USMCA, the successor to the North American Free Trade Agreement. The ratification of this agreement would provide much-needed certainty for an industry that continues to struggle from market volatility and a depressed farm economy.

“Many of our producers depend on trade with Mexico and Canada to market their commodities,” said Wayne Stafford, a cattle and grain farmer from Cecil County. “If we pass this agreement, it could be a critical step in working through our negotiations with other trading partners like Japan and the European Union.”

Use of the work visa program involves several state and federal agencies, which can cause a lengthy processing period before workers arrive. A more streamlined process is necessary for the success of this program.

“A reformed guest program is essential for not only Maryland agriculture but also aquaculture and the seafood industry,” said Jamie Tiralla, a livestock farmer from Calvert County. “These seasonal industries depend on the work visa program for production and processing of our local food supply.”

In addition, labor costs are one of the highest associated with running a farm business. Farmers using the visa program are required to pay workers the adverse effect wage rate — which is 130 percent of minimum wage in Maryland. Farmers must also provide housing and transportation to the worksite from the home country of the workers.

Members of Congress were asked to cosponsor and support S. 1522, the Broadband Improvement Act.

Access to high-speed internet is imperative for an industry that continues to rely on advancements in technology. Precision agriculture is one way broadband can be used to be more efficient, economical, and environmentally responsible — but it requires coverage in the farm fields.

“Precision agriculture is one of the greatest tools farmers have for conservation, especially in Maryland where we’re working so hard to protect the Chesapeake Bay,” says John Draper, a grain farmer from Queen Anne’s County. “Access to broadband allows us to use these tools more. It’s also necessary when running a business, and a farm is a business.”

In early June, President Trump signed a disaster relief measure to help farmers recover from extreme circumstances that are out of their control — such as hurricanes, tornadoes, and flooding.

“I’m fortunate that my farm hasn’t been affected by an extreme disaster, but that doesn’t mean it couldn’t happen one day,” said Chris Catterton, a cattle farmer from Anne Arundel County. “In many cases, these events cause almost complete losses of livestock or crops. We are very appreciative of our representatives’ support in passing this measure.”

Those involved with the craft beverage industry are in support of the Craft Beverage Modernization & Tax Reform Act. This bill would make permanent an alcohol excise tax reduction that went into effect two years ago. Maryland wineries and breweries were able to save thousands in taxes, which allowed them to hire additional staff for their businesses.