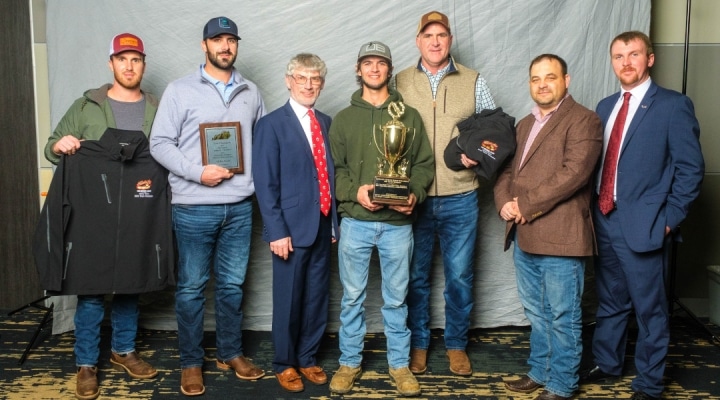 PRINCETON, Ky. — The Kentucky Soybean Board honored its yield and quality contest winners at the Kentucky Commodity Conference on Jan. 19. Dennis McKay Farm of Daviess County had the top full-season entry in the state, with 112.18 bushels per acre, setting a new state soybean yield record.

To commemorate this accomplishment, the Kentucky Soybean Board presented Dennis McKay Farm with two “100 Bushel Club” jackets, personalized with their farm name and crop year in addition to the standard trophies and prize money. Second in irrigated full-season beans was O’Bryan Grain Farms of Daviess County with 96.07 bushels/acre.

In double-crop soybeans, Ken-Maur Farms of Daviess County won the Irrigated Division with 71.65 bushels per acre, followed closely by Dixon Farms of Graves County with 71.63. The Goetz Brothers were in the winner’s circle again for Non-Irrigated double-crop soybeans with 73.72 bushels/acre, followed by MW Thomas Farms of Hardin  County with 73.37 bushels/acre bushels per acre. Double-crop beans are sown into the stubble of winter wheat, which is harvested in the spring. This process gets its name because the farmer gets a “double crop” from the field, as opposed to full-season soybeans, which yield only one crop per year.

In the 2022 soybean quality contest, Meredith Farms of Henderson County had the highest percent oil again with 21.46 percent, while second place in oil went to PPJ Thompson Farms of Daviess County with 21.25 percent. In protein, Andrew Bullock Farms had the highest percent at 35.46 percent, while Beanland Farms of Daviess County  took second with 35.13 percent.