Home / Texas / McGarraugh retires from TWPB after 36 years
A new user experience is coming! We'll be asking you to login to your Morning Ag Clips account March 1st to access these new features.
We can't wait to share them with you! Read more here. 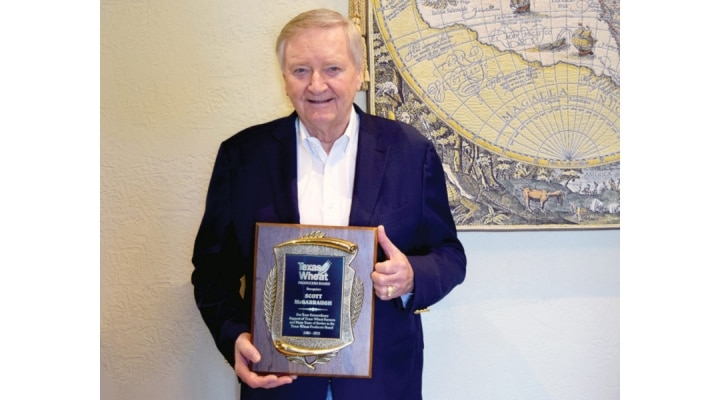 AMARILLO, Texas — Producer and board member Scott McGarraugh has retired from the Texas Wheat Producers Board (TWPB) after many years of service.

“During my time on the board, we enacted positive change for producers through our work on farm bills, trade and research,” McGarraugh said. “I am grateful for the experience and look forward to seeing how Texas Wheat will impact agriculture in the future.”

McGarraugh was born and raised in Perryton. He started farming at the age of ten and continues to run an expanded operation consisting of wheat, milo, hay and cattle. He is also involved in the oil and gas industry. McGarraugh attended West Texas State University and graduated with a degree in business and a minor in agriculture. He has been married to his wife Lindy for 53 years. Together, they have a son, a daughter and five grandchildren.

In 1985, McGarraugh was first elected to the TWPB as a representative of District I. He was named chairman in 2003 and served until 2005. He held leadership roles with the Texas Wheat Producers Association, acting as a vice president until his retirement this year. McGarraugh also represented Texas on the U.S. Wheat Associates (USW) board of directors. During his term with USW, he traveled to Japan, China, Vietnam and the Philippines to promote high quality U.S. wheat to millers and bakers. He also participated in mission trips to Cuba and Mexico.

McGarraugh has served in many capacities in the agricultural industry. He was appointed to the Texas Farm Service Agency under Presidents George H.W. Bush and George W. Bush and participated on several committees. He is also a longtime member of the Ochiltree County Farm Bureau.

Over the years, McGarraugh has received various accolades for his professional accomplishments and character, including the Perryton Citizen of the Year Award, the Perryton Gold Star Citizen Award and the West Texas A&M University Distinguished Alumni Award.

McGarraugh’s position has been filled by Jason Schickedanz based on the results of the TWPB biennial election. Schickedanz was sworn in during the May board meeting.

The TWPB is a statewide board funded by a voluntary two cent per bushel checkoff program. Checkoff funds are used for research, market development and education to further the wheat industry in Texas and support the profitability of wheat producers. For more information, visit http://www.texaswheat.org.