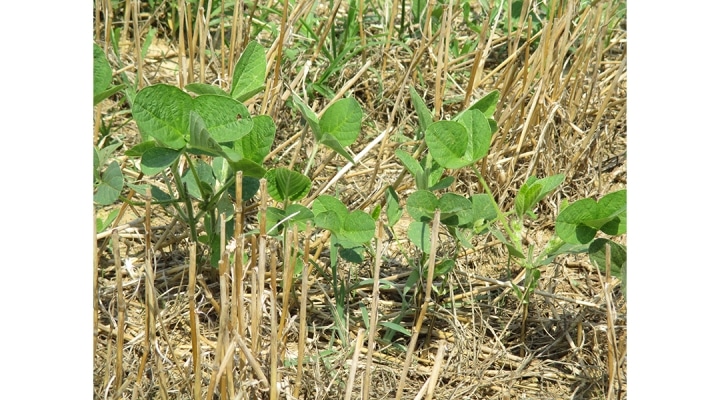 Because of changing weather patterns in the past 30-40 years, updated data on intensive double crop soybean production was needed to keep farming recommendations current. (Carrie Knott)

MADISON, Wis. — Double cropping is a practice where farmers harvest one crop, and then plant and harvest a second crop in the same field – all within the same year. It allows farmers to make the most out of the limited growing season.

By double cropping soybean after winter wheat, farmers can increase their net returns. These increased returns come without needing to farm additional acreage.

“Often, research is focused on single crop soybean,” says Carrie Knott, member of the American Society of Agronomy. “But there is a real need for research in double crop systems, as well.”

A new study from Knott and her team has determined soybean characteristics that can maximize chances that farmers profit from double cropping soybean. The research was published in Agronomy Journal.

Soybean relative maturity groupings are a numerical scale that describe how fast soybean varieties develop in relation to day lengths in different regions. In general, the lower the number, the faster the soybean plants are ready for harvest.

Much of the previous research on double cropping soybean is 30 to 40 years old. Knott and her colleagues wanted to make sure that the current recommendations for double crop soybean were still valid to maximize seed production and profitability.

“Weather conditions have changed during that time,” says Knott. “They are predicted to keep changing in the coming years, as well.”

Double crop soybean accounts for about 10% of soybeans produced in the Upper Mid-South and Ohio River Valley regions. However, that figure was as high as 36% of the region’s soybean production in the past.

“The logistics of the double crop system can be very demanding at times,” says Knott.

There is potential for reduced profitability. There are also some increased risks associated with producing double crop soybean.

Knott and her colleagues set out to identify profitable farming strategies for double crop soybean. They also aimed to understand the various risk factors.

But Knott and her colleagues wanted to learn about more than yields. They also used risk analyses to find which relative maturity groups and seeding rate combinations maximized the likelihood of positive net returns for farmers.

Results show that planting soybean relative maturity group 4.7 at 200,000 seeds per acre would have the highest probability of creating a positive net economic return.

“These findings support the use of a longer relative maturity group as well as an increased seeding rate to maximize yield and economic net benefit,” explains Knott.

The maturity group recommendations from the study matched the existing 40-year-old recommendation. “Weather patterns have changed considerably in the last 40 years,” says Knott. “So, we were very surprised!”

Carrie Knott is a researcher at University of Kentucky.

Virtual conference for veterans in ag

Keep food safety in mind when grilling this summer
May 22, 2022