Home » Match the cure to the pest problem 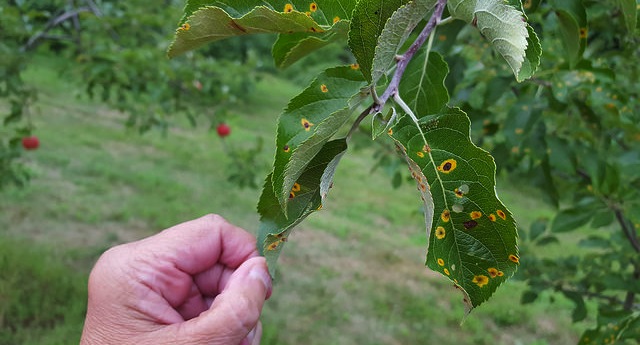 WASHINGTON — The caller on the other end of the phone was worried: Her apple trees had suffered severely last year from cedar-apple rust disease, and she wanted to know how to keep them from being attacked again.

I can offer two important pieces of advice, whether you’re growing apple trees or any other plant.

When putting in new plants, consider pest-resistant varieties, if they exist. In the case of apples, Golden Delicious and its progeny generally are most susceptible to rust disease. Some apples, such as the tasty variety Liberty, are resistant to rust as well as other major apple diseases.

Your plants may be spared a particular pest problem because that pest never makes it to your garden. Cedar-apple rust, for example, is pretty much absent where susceptible juniper species — Eastern red cedar, Rocky Mountain juniper, creeping juniper and common juniper — are not native.

Powdery mildew, on the other hand, is among those pests that threaten the health and beauty of phlox plants almost everywhere from midsummer on. However, varieties such as Katherine and David are among those resistant to it.

If your hybrid tea roses are being decimated by blackspot disease, another frequent unwanted visitor to gardens, why not try the old-fashioned, soft pink Blush Moss or the English rose Tamora, whose cuplike blossoms are the color of peach ice cream? Neither of these roses is particularly affected by blackspot.

1. IF SPRAYING, CHOOSE AN APPROPRIATE SPRAY

My worried caller was not interested in replanting and waiting for new trees to bear fruit. She said she might try an oil spray to bring the needed relief. Which brings us to our second bit of advice on pests: Before you spray, make sure you’ve got the right one. In the case of cedar-apple rust, spraying oil would be a waste of time.

So spraying a fungicide on your rose, whose leaves are mottled white because of a virus disease, would be for nought. Spraying B.t., short for bacillus thurengiensis, can be an environmentally sound way to control caterpillars, but would have no effect on cedar-apple rust.

Garden sprays are available that contain mixtures of insecticides and fungicides. Such sprays are easy to use, but they have a financial and environmental downside. They cost more and you’ll likely be dousing the environment with some pesticides that are not needed.

Always read the fine print on the label, whether it’s a mix of pesticides or a single pesticide, to find out just what pests will be controlled. Not only does this ensure that your spray is effective, but it keeps you on the right side of the law. It is illegal to spray for anything except what is listed on the label, or in a manner other than specified.

Also consider other measures to thwart pests, such as giving a plant a good site and growing conditions, cleaning up or pruning off diseased parts and, in the case of annuals, timing plantings to avoid certain pests.