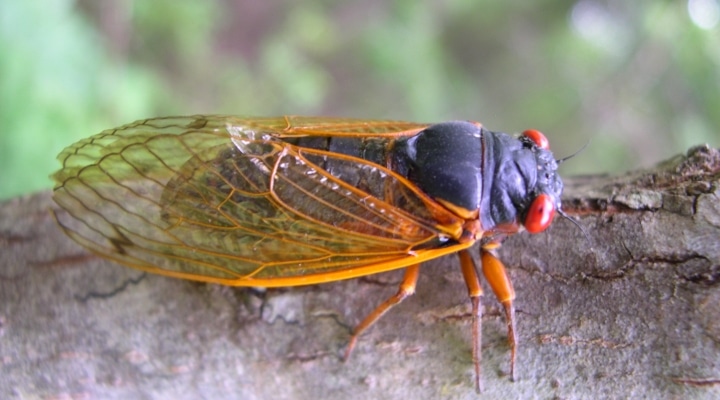 Some Virginians will soon hear a cacophony of chirping cicadas as Brood X emerges from a 17-year subterranean retreat. (photo provided by University of Georgia)

WINCHESTER, Va. — Some Virginians will soon hear a cacophony of chirping cicadas as Brood X emerges from a 17-year subterranean retreat.

That loud buzzing in the trees equates to Barry White and candlelight for the billions of cicadas hoping to honeymoon in northern Virginia. Also known as the Great Eastern Brood, these periodical cicadas appear every 17 years throughout the eastern U.S., emerging when the soil reaches 64 degrees.

A U.S. Forest Service map shows Brood X’s emergence in a few northern Virginia counties within the next week or two, though its amorous song will be heard throughout the region.

Periodical cicadas like Brood X live as underground nymphs, emerging to reproduce after 13 or 17 years, unlike annual cicadas.

The simultaneous timing of their massive emergence may be an evolutionary survival measure. Their large numbers quickly satiate their predators but enough surviving cicadas are left to complete their reproductive cycle.

Snapp said cicadas “stitch” the limbs of young trees, leaving a trail of small incisions and gaps in which they lay eggs. While the loss of tender new limbs could impact tree development, it’s not bad enough to mitigate, he said.

“They stitch and lay their eggs on the limbs that break off and go back into the ground to start their life cycle again,” Snapp explained. “They can be a nuisance, but they don’t do that much damage. We’ve always lived through it in the past, and it’s not that big of a deal.”

“Cicadas will only damage branches about the diameter of a pencil, so if anything, they offer a natural pruning process,” said Maxey-Nay, who has a background in entomology. “Any healthy trees can withstand the damage.”

She added that home gardeners concerned about immature trees can cover them with a protective net. Brood X should be active through August.

“When you’re sitting outside and they’re singing, you can barely hear yourself think or talk, it’s that loud,” he said. “And that’s really cool for youngsters who never experienced it before.”