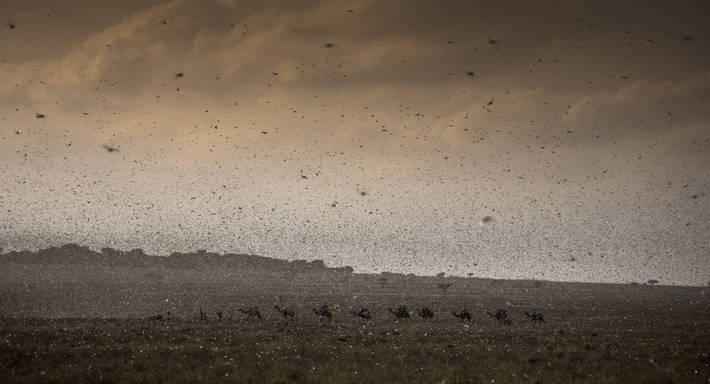 Shilabo, Ogaden, Somali region - Ethiopia - A herd of camels is trying to find its way through an invasion of locust. (Photo: FAO)

ROME and NAIROBI — Desert Locust swarms in Ethiopia, Kenya and Somalia – already unprecedented in their size and destructive potential – could swell exponentially and spill over into more countries in East Africa if efforts to deal with the voracious pest are not massively scaled up across the region, FAO warned today.

“This has become a situation of international dimensions that threatens the food security of the entire subregion. FAO is activating fast-track mechanisms that will allow us to move swiftly to support governments in mounting a collective campaign to deal with this crisis,” said FAO Director-General QU Dongyu.

“Authorities in the region have already jump-started control activities, but in view of the scale and urgency of the threat, additional financial backing from the international donor community is needed so they can access the tools and resources required to get the job done,” Qu said. “FAO stands ready to leverage our expertise and facilitate a coordinated regional response,” he added.

Recent weather in East Africa has created conditions that favour rapid locust reproduction. Left unchecked, the numbers of crop-devouring insects there could grow 500 times by June.

Such swarms – potentially containing hundreds of millions of individual Desert Locusts — can move 150 kilometres a day, devastating rural livelihoods in their relentless drive to eat and reproduce. A Desert Locust devours its own weight in food per day – about two grams.

Swarms continue to pour into Kenya from Ethiopia and Somalia and are rapidly spreading to the centre of the country.

In Ethiopia, the insects are moving steadily south towards the Rift Valley, the country’s breadbasket.

Ethiopia and Somalia have not seen Desert Locust swarms of this scale in 25 years, while Kenya has not faced a locust threat of this magnitude in 70 years.

South Sudan and Uganda are not currently affected, but are at risk.

FAO is providing forecasts, early warning and alerts on the timing, scale and location of invasions and breeding.

The speed of the pest’s spread and the size of the infestations are so far beyond the norm that they have stretched the capacities of local and national authorities to the limit.

Given the scale of the current swarms, aerial control is the only effective means to reduce the locust numbers.

Aerial operations need to be upscaled substantially and very quickly in Ethiopia and Kenya. In addition, “Alongside pest control activities our response must include efforts to restore people’s livelihoods,” said FAO’s Director-General. “Communities in Eastern Africa have already been impacted by extended droughts, which have eroded their capacities to grow food and make a living. We need to help them get back on their feet, once the locusts are gone,” Qu said.

At this stage and on basis of conservative estimates, FAO seeks $70 million to urgently support both pest control and livelihood protection operations in the three most affected countries.

In India, Iran and Pakistan numerous Desert Locust swarms have been present since June 2019 and have been breeding. Some of these swarms have migrated to southern Iran where recent heavy rains allowed them to lay eggs that could turn into swarms in spring 2020.

FAO is monitoring all situations closely, and is actively engaging with all countries facing Desert Locust threats to support their response activities.