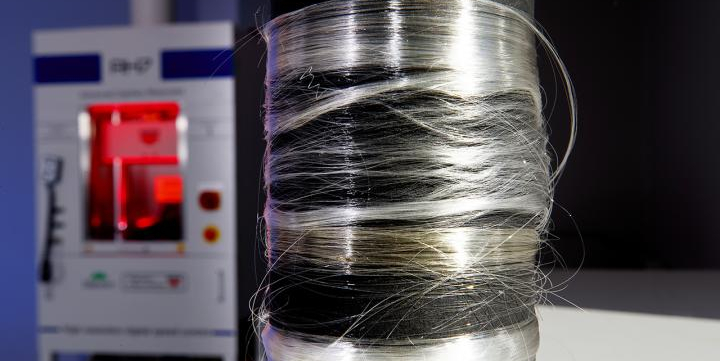 Fibers of a corn-derived, biodegradable plastic developed at the University of Nebraska-Lincoln. Nebraska researchers and their colleagues have demonstrated a new technique for improving the properties of bio-plastic that could also streamline its manufacturing, making it more competitive with petroleum-based counterparts. (Craig Chandler, University of Nebraska-Lincoln)

LINCOLN, Neb. — Introducing a simple step to the production of plant-derived, biodegradable plastic could improve its properties while overcoming obstacles to manufacturing it commercially, says new research from the University of Nebraska-Lincoln and Jiangnan University.

That step? Bringing the heat.

Nebraska’s Yiqi Yang and colleagues found that raising the temperature of bio-plastic fibers to several hundred degrees Fahrenheit, then slowly allowing them to cool, greatly improved the bio-plastic’s normally lackluster resistance to heat and moisture.

Its thermal approach also allowed the team to bypass solvents and other expensive, time-consuming techniques typically needed to manufacture a commercially viable bio-plastic, the study reported.

Yang said the approach could allow manufacturers of corn-derived plastic — such as a Cargill plant in Blair, Neb. — to continuously produce the biodegradable material on a scale that at least approaches petroleum-based plastic, the industry standard. Recent research estimates that about 90 percent of U.S. plastic goes unrecycled.

NOT EASY BEING GREEN

The approach uses polylactic acid, or polylactide, a component of biodegradable plastic that can be fermented from corn starch, sugarcane and other plants. Though most plastics are made from petroleum, polylactide has emerged as an environmentally friendlier alternative.

Yet polylactide’s susceptibility to heat and moisture, particularly during the manufacturing process, has limited its use in textiles and other industries. In searching for ways to address the issue, researchers long ago discovered that mixing mirror-image polylactide molecules — generally referred to as “L” and “D” — could yield stronger molecular interactions and better performance than using just the L or D alone.

But there was another catch. Convincing a reasonable proportion of the L and D molecules to permanently pair up is difficult, often forcing researchers to concoct costly and complicated matchmaking schemes. Some of the most common involve the use of solvents or other chemical agents whose disposal can cause environmental issues of their own.

“The problem is that people couldn’t find a way to make it work so that you could use it on large scales,” said Yang, Charles Bessey Professor of biological systems engineering and of textiles, merchandising and fashion design. “People use nasty solvent or other additives. But those are not good for continuous production.

“We don’t want to dissolve the polymers and then try to evaporate the solvents, and then have to consider reusing them. That’s just too expensive (and) not realistic.”

Yang and his colleagues decided to pursue another approach. After mixing pellets of the L and D polylactide and spinning them into fibers, the team rapidly heated them to as hot as 400 degrees Fahrenheit.

The resulting bio-plastic resisted melting at temperatures more than 100 degrees higher than did plastics containing only the L or D molecules. It also maintained its structural integrity and tensile strength after being submersed in water at more than 250 degrees, approximating the conditions that bio-plastics must endure when being incorporated into dyed textiles.

The textile industry produces about 100 million tons of fibers annually, Yang said, meaning that a feasible green alternative to petroleum-based manufacturing could pay off both environmentally and financially.

“So we just used a cheap way that can be applied continuously, which is a big part of the equation,” Yang said. “You have to be able to do it continuously in order to have large-scale production. Those are important factors.”

Though the team has demonstrated continuous production on a smaller scale in Yang’s lab, he said it will soon ramp up to further illustrate how the approach might be integrated into existing industrial processes.

— University of Nebraska-Lincoln
via EurekAlert!