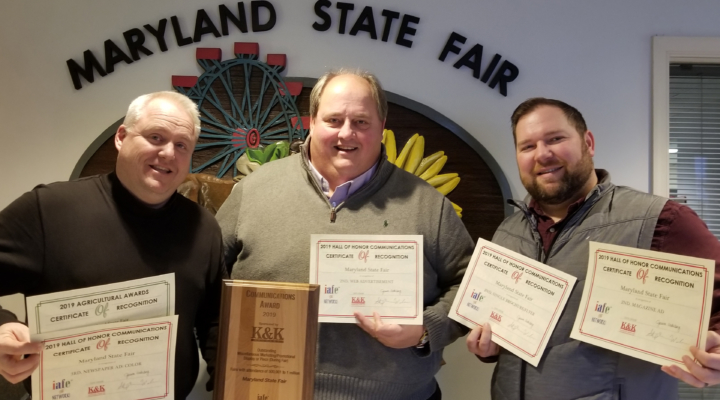 “Our Maryland State Fair team is honored to be recognized for the hard work and dedication it takes to present high-quality, fun, and educational entertainment events for more than a half million fairgoers each year,” said Maryland State Fair General Manager Andy Cashman.

The Maryland State Fair received the following IAFE Hall of Honor Communications Awards sponsored by K&K Insurance in which there were over 800 entries:

The “AwShucks,” “CORNgratulations” moveable cut-out cartoon ear of corn was moved each day during the 12 days of the fair. Fairgoers were encouraged to explore the fairgrounds to find the corn, take a photo, and share the photo on social media.

A rotation of four full-color banner ads on the Baltimore Sun web site featured the More Than A Fair, We’re A Culture “Feel The Rush,” “Take A Bite,” “Have A Seat, and “Enjoy the Ride” themes with Maryland State Fair dates.

The free double-sided Maryland State Fair Rack Card was produced and distributed to welcome/travel centers, libraries, hotels, local businesses and more to increase awareness of and attendance to the Maryland State Fair. The Rack Card announced the theme, dates, website and social media channels on the front. The flip side, provided fair hours, admission and ride prices, concert dates and prices, as well as Save-the-Dates for the 2020 Fair. It also highlighted the Maryland State Fairgrounds facilities as the premier event rental location, and provided information about the on-site Farmers Market.

The full-color ad placed in the Baltimore County Visitors Guide featured the four elements of the More Than A Fair, We’re A Culture theme utilizing creative bull riding, corndog, Thoroughbred horse racing, and ride illustrations. The ad also highlighted the Fairgrounds as one of Maryland’s top meeting and exhibition facilities. The Baltimore County Visitors Guide was distributed across the state to travel/welcome centers, hotels and other tourism sites.

The full-color Maryland State Fair print ad utilized the More Than A Fair, We’re A Culture illustrations and a “Buy One Get One Free” Coupon.

The Maryland State Fair received an award in the following IAFE Agriculture Category sponsored by ShoWorks:

The Maryland State Fair was provided the opportunity to create an event involving the world-famous Budweiser Clydesdale horses in exchange for the horses laying over at the Fairgrounds while in town for the Baltimore Orioles Opening Day Ceremony. The Maryland State Fair Budweiser Clydesdale “Community Fest” was created as a free community event that enabled neighbors to see the Clydesdales up close and personal, and enjoy a live band, discounted food and drinks, face painting, balloon twisters, games, and more.