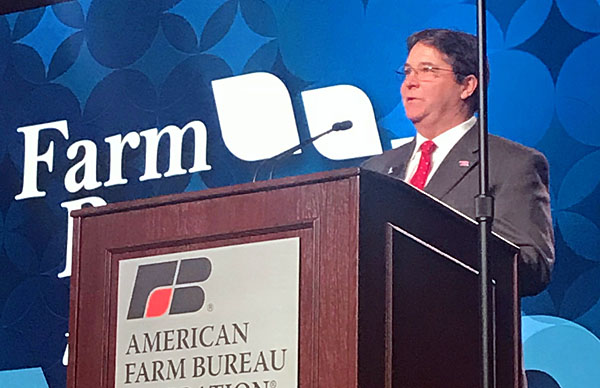 United States Secretary of Agriculture Sonny Perdue highlighted priorities and accomplishments in the new administration and USDA during his address to Farm Bureau members. Perdue spoke about the importance of trade to U.S. agriculture and the priority of successful NAFTA negotiations. He highlighted USDA’s newly released Economic Research Service report that shows 99 percent of American farms are family farms that account for 90 percent of production. “President Trump understands that family farms are small businesses that must turn a profit to provide for their families,” said Perdue.

Delegates to the American Farm Bureau Federation’s 2018 Annual Convention unanimously re-elected AFBF President Zippy Duvall on Tuesday. Resolutions approved by farmer and rancher delegates from across the nation ran the gamut of issues, from trade to regulatory reform, crop insurance, biotechnology and more.

“Today’s actions give us a clear roadmap at a time when farmers are on the verge of their fifth consecutive year of shrinking net farm income,” Duvall said. “Despite these difficulties, we remain optimistic: Official Washington feels more like a partner than it did just a short time ago. We have real opportunities to make progress in policy that we have not had in the past.”

Wade and Shelby Hapmton of Prince George’s County represented Maryland in the Young Farmers Excellence in Agriculture Award competition. They placed fourth nationally and received a toolbox and gift cards from Case IH.