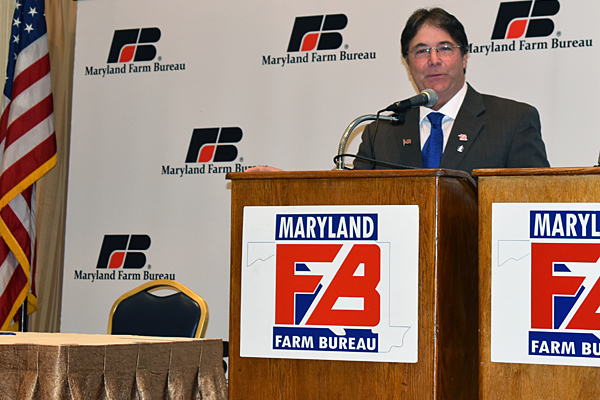 DAVIDSONVILLE, Md. — The Maryland Farm Bureau held its 102nd Annual Convention from Dec. 3-5 at The Clarion Resort Hotel in Ocean City with over 500 voting delegates, members and guests in attendance.

“Our members reflected on our accomplishments and planned for the next year of promoting and protecting Maryland agriculture and rural life,” said Chuck Fry, president of MFB. “We welcomed new gave thanks to outgoing county Farm Bureau Presidents and state Board members.”

A panel consisting of William Layton from the United Soybean Board, Jason Scott from the U.S. Wheat Associates and Ryan Bennett of the National Milk Producers Federation talked with the MFB Young Farmers Committee about foreign trade and open world markets for agriculture. Jenny Rhodes, farmer and UMD Extension Agent in Queen Anne’s County, spoke to the MFB Women’s Leadership Committee about her background and career as a farmer and food labeling.

Breakout sessions were held Monday on topics from farm succession planning and farm trucking to wildlife management and agricultural law. During the business sessions on Monday and Tuesday, Farm Bureau voting delegates from all 23 counties reviewed the organization’s policy on issues pending before government. The 2018 policy positions that were adopted by the delegate body will provide direction for the Farm Bureau lobbying team in Annapolis and Washington.

Awards were presented to the following members and Nationwide agents at the annual convention:

See attached document for more details about the awards and recipients. Contact Katie Ward for more photos of the award winners, speakers and events.

The 103rd Annual Maryland Farm Bureau Convention will be held from Dec. 2-4, 2018, at The Clarion Resort Hotel in Ocean City, Md.