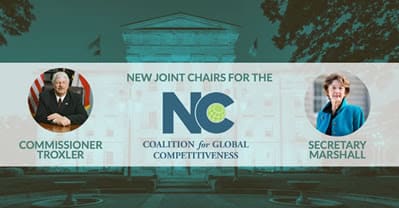 Two of North Carolina’s longest-serving and most respected statewide elected leaders will serve as new co-chairs of the N.C. Coalition for Global Competitiveness (the Coalition). N.C. Secretary of State Elaine Marshall and N.C. Commissioner of Agriculture Steve Troxler have agreed to lead the Coalition, which is a partnership of private and public sector leaders focused on enhanced global engagement.

RALEIGH, N.C. — Two of North Carolina’s longest-serving and most respected statewide elected leaders will serve as new co-chairs of the N.C. Coalition for Global Competitiveness (the Coalition). N.C. Secretary of State Elaine Marshall and N.C. Commissioner of Agriculture Steve Troxler have agreed to lead the Coalition, which is a partnership of private and public sector leaders focused on enhanced global engagement. Both Marshall and Troxler have broad international experience, strong records of achievement, and a commitment to bipartisanship.

“North Carolina has a distinct opportunity to strengthen our position as a global leader by working together to enhance our competitiveness in business, education, health care, technology and many other crucial sectors to our economy,” said Sec. Marshall. “I’m honored to work with Commissioner Troxler to continue building on North Carolina’s reputation as a great place to live, work, invest and visit.”

“With 95 percent of the world population living outside the United States, global trade is essential to North Carolina’s long-term agricultural success,” Troxler said. “My goal is to help position North Carolina’s farmers and agribusinesses to meet the global demand for food and fiber and to continue to grow our state’s No. 1 industry. The work of the N.C. Coalition for Global Competitiveness offers a tremendous opportunity to benefit many North Carolinians and I look forward to working with Secretary Marshall to help steer us to a stronger future in international trade and global partnerships.”

In 2015, North Carolina was the first state to develop a roadmap for global engagement across all sections—education business, government, and community. In 2020, leaders from all around North Carolina provided input to shape the updated N.C. Blueprint for Global Engagement 2020, which focuses on strategic areas crucial to the advancement of global engagement.. The Coalition also created the  N.C.’s Global Engagement Snapshot an online tool, to track the state’s path and progress toward global engagement. The Coalition was founded in 2013 and was previously chaired by former NC Commerce Secretary Jim Fain (2013-2020).

In addition, the Coalition recently concluded its 2nd annual N.C. Global Advantage Forum, which convened thought leaders from a variety of sectors to engage around global opportunities in education, workforce development, economic and community development, and entrepreneurship.

In 1996, Secretary of State Elaine F. Marshall became the first woman elected to statewide, executive branch office in North Carolina. Voters re-elected her to a seventh term in 2020. A former teacher, small business owner, and private practice attorney, Secretary Marshall was elected to the NC Senate before rising to statewide office.

Under Secretary Marshall’s administration, 1.5 million businesses have been formed, she has pioneered e-commerce in government, protected investors and intellectual property owners, and promoted financial capital formation in North Carolina.  Recognized as one of the best partnerships of its kind in the nation, she has served as co-chair of the North Carolina-Moldova Bilateral Partnership since its beginning in 1999.

Secretary Marshall has been very active in many civic groups in the areas of child welfare, women’s issues, and agriculture and small-town economic development. She is also a past president of the National Association of Secretaries of State.

Since becoming Secretary of State, she has received numerous state and national awards for leadership in technology, government innovation, and women’s leadership including the 2020 John A. “Pete” Eberhart Ray of Light award from Boundless Impact for her decades of work advancing North Carolina’s Global Competitiveness, The N.C. Bar Association’s 2020 Chief Justice I. Beverly Lake Jr. Public Service Award, the 2018 Person of the Year Award from The Women’s Business Center of North Carolina, and the 2017 International Trade Lifetime Achievement Award from the Charlotte Business Journal, and many more.

Agriculture Commissioner Steve Troxler was raised in the Guilford County community of Browns Summit and has spent his entire career in agriculture as founder, owner and operator of Troxler Farms. Over the years, the family-owned farm has produced tobacco, wheat, vegetables and soybeans.

He also serves on the boards of the N.C. Foundation for Soil and Water Conservation, the Rural Economic Development Center and the N.C. Biotechnology Center. He is a member of numerous organizations, including the N.C. Tobacco Research Commission and the Southern United States Trade Association.

For his work in farming and as a public servant, Commissioner Troxler has been recognized with numerous awards. Most recently, he received the 2021 Distinguished Service Award by the NC SweetPotato Commission. In 2020, he was recognized by the WNC Ag Hall of Fame for his lifetime career in agriculture and local, statewide and national visionary leadership for North Carolina’s ag industry. He has also received the Excellence in Leadership award from Wake County Agribusiness.

About the N.C. Coalition for Global Competitiveness

The N.C. Coalition for Global Competitiveness (the Coalition) is a partnership of private and public sector leaders from a variety of industries, agencies, and educational institutions from all over North Carolina that works to foster thought leadership and serves as a catalyst for a statewide vision for global engagement. The Coalition, convened by Go Global NC, focuses on optimizing North Carolina’s global engagement through a comprehensive approach, including FDI, trade and workforce development to generate jobs and opportunities and create an environment for success in the global economy.

Go Global NC, part of the University of North Carolina System since 1979, designs and manages programs that build the capacity of policy leaders, educators, students, and business and community leaders to enable North Carolina to succeed in a global economy and increasingly interdependent world. Visit goglobalnc.org to learn how Go Global NC connects North Carolina and the world.