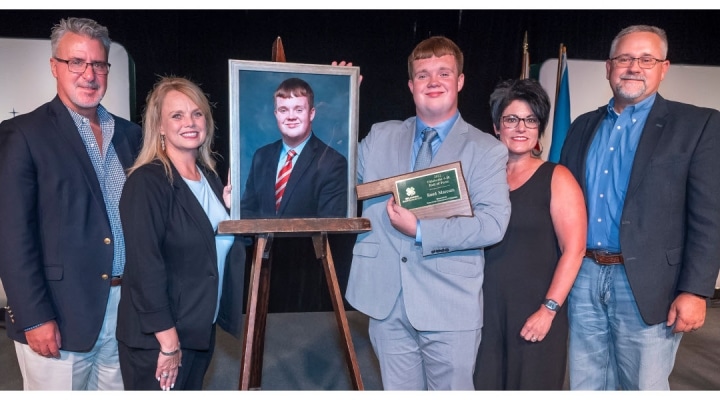 The best part – as an upcoming senior at McAlester High School, he has another year in the youth development program to accomplish even more.

Marcum was recognized as an inductee into the Oklahoma 4-H Hall of Fame, the state’s highest 4-H award, at the Honors Night Assembly during the 101st State 4-H Roundup at Oklahoma State University. He received a $5,000 scholarship sponsored by Farm Credit Associations of Oklahoma.

“This is such a huge honor. I may be the Oklahoma 4-H Hall of Fame winner who hasn’t won County Hall of Fame first,” Marcum said with a laugh. “I’ve had a great 4-H career so far, and I still have time to do more.”

Doing more is a lofty goal, considering what he has already achieved.

His 4-H career with the Frink-Chambers 4-H Club began on the slower side. When he enrolled in 4-H, he was not very active, but that didn’t last long. The Oklahoma 4-H Youth Development program is known for teaching youth to give back to their communities, and Marcum has done that many times over. His service projects started small with paper sacks filled with soap, ramen noodles, granola bars, shampoo, deodorant and candy that he distributed at a homeless shelter in McAlester.

“Since that time, I’ve created numerous 4-H service projects. I’ve become known in Pittsburg County as the 4-H service project video guy. I post videos about my projects on social media to help promote them and keep everyone updated,” he said. “My biggest thing I do in 4-H is service. I just enjoy helping others.”

One of his most popular initiatives is the annual J. Michael Miller Book Bag Giveaway. Six years ago, he started with string bags filled with composition books, pencils, colored pencils, erasers and crayons. Thanks to generous donations from his community, he gave away 365 bags that year. The community service project has since grown to provide full-sized backpacks filled with the same supplies plus a few extra school items.

To date, Marcum has given away 20,758 backpacks to students all across Oklahoma as well as some students in Arkansas, plus the 7,000 he’s set to give away this school year.

“My goal for next year will be even more backpacks,” he said.

Another project he started was a silent auction fundraiser for the Hudson Strong Memorial Foundation. After learning that less than 4% of cancer funding goes to pediatric cancer research, he raised over $114,000 for it. The funds raised are allocated to the foundation, which then provides scholarships for math and science to research a cure for pediatric cancer. Funds also help with families’ medical expenses.

In McAlester, the name Reed Marcum is synonymous with Christmas. When he learned some of his classmates didn’t get presents at Christmas, he started the Toy Give Away. It has grown exponentially over the last several years, starting with just over 1,200 toys given away the first year to 17,236 this past holiday season. In all, Marcum has organized the distribution of 43,411 holiday gifts for children.

“We also provide socks, underwear, hats and gloves to the families that need them,” Marcum said.

Reed certainly has made his mark on the community of McAlester, and the city has even declared Feb. 24 as Reed Marcum Day.

What has helped Marcum get to this level of success with his service projects? The 4-H program.

“My 4-H leader, Donna Curry, and my county 4-H educator, Greg Owen, helped teach me in a way that built my confidence in the work I was doing, and that if I believed in the projects, they would be successful,” he said. “Mrs. Curry passed away a few weeks ago, but I was able to tell her that I’d won hall of fame. She was like a second mom to me in 4-H.”

“Reed is non-stop energy. He is funny, focused and driven beyond compare. He’s always looking for new ways to help people,” Owen said. “I told Donna Curry, his 4-H leader, I wanted to get Reed involved in the Pittsburg County Ambassador program. And from there, we just kept pushing him, in a good way.”

Owen said Marcum initially set a goal to get a record book interview. He did but didn’t win. The next year, he won a record book award. In 2021, he set his sights on earning a hall of fame interview. Meeting his goal last year helped him win a spot in the 2022 Hall of Fame.

“We have provided some guidance for him over the years, but the drive and determination people see is all him,” Owen said.

Marcum is extremely coachable, Owen said, and when given advice on how to improve something, he takes it to heart.

“Reed works really hard in everything he does, not just in his service projects. He takes to coaching quickly and accomplishes what he needs to do,” Owen said. “He’s a goal setter. He has accomplished everything we thought he would.”

Marcum is a senior at McAlester High School and is the son of Angie Miller and Jim Marcum.