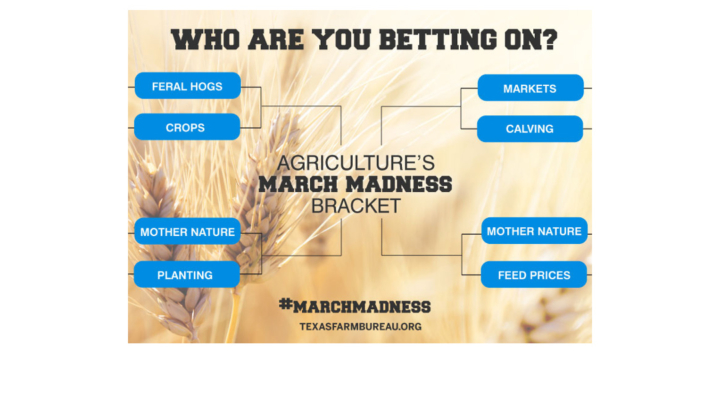 Agriculture’s game lasts all year. It’s a bracket full of excitement. There are moments of nail-biting, stressful decisions. There are wins and losses. (Texas Farm Bureau)

AUSTIN — Wins and losses. They aren’t just for your March Madness bracket. They’re for agriculture, too.

And boy have the last few months been tough.

Farmers along the Texas Gulf Coast have faced nearly non-stop rains since last fall. They’re just now preparing their fields to plant when most would’ve already been finished by now.

Colder temperatures delayed planting some in Central Texas, and South Texas and parts of the Panhandle are once again facing drought conditions.

We’re only in the first half of the year, but I’d say Mother Nature’s full court press has been pretty effective so far.

Spring storms are on the horizon, and they can be devastating. A hail storm can damage a wheat field within hours, and flooding can wipe out newly planted crops.

But it’s not just Mother Nature farmers have to worry about. There are pests and diseases, too.

Right now, feral hogs are playing man-to-man coverage on corn fields. Farmers plant. Feral hogs root up the seed, eat it and move to the next. Destroying field after field after field. Farmers will have to replant and find ways to control the pigs, keeping them from eating the seed.

At the end of the first half, Mother Nature will bring in a fresh defense—extreme temperatures. Last year, Central Texas saw 114 degrees. Now that’s what you call hot!

But farmers and ranchers don’t leave their game in the locker room. They’re all hands on deck to make sure their crops and livestock are cared for.

In the second half, volatile markets for crops and livestock can prove to be a tough opponent. Trade negotiations impact farmers and ranchers. And regulatory overreach will have them calling for a technical!

But farmers work until the job is done, harvesting late into the night. Ranchers make sure the cows are fed and watered and that fences are fixed.

As the clock winds down and Mother Nature steps up her game, farmers wrap up harvest. Just like a half-court shot, praying for the win.

But sometimes the buzzer can’t be beat. Last year, cotton was left standing in the fields unable to be harvested due to torrential rains. It’s like a senior who missed the last shot as time expired.

It takes time to recover from the loss. But for farmers, there’s another game to play. Another season to prepare for. Because on the court and in the field, it’s about how hard you work, your dedication and passion to your craft.

Agriculture’s game lasts all year. It’s a bracket full of excitement. There are moments of nail-biting, stressful decisions. There are wins and losses.

Who will you bet on? Mother Nature, markets or farmers and ranchers?

My money is on our Texas farmers and ranchers—the true Cinderella story of this March Madness bracket.