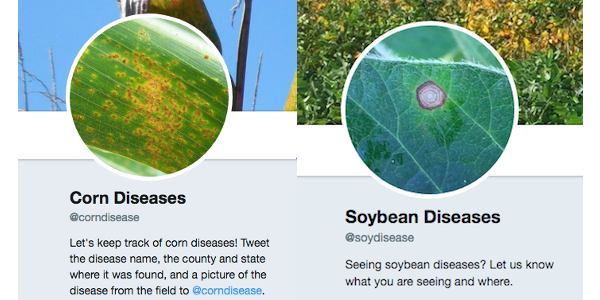 During the observation period between 2016 and 2017, two Twitter accounts, @corndisease and @soydisease, were created to track the appearance of disease in corn and soybean fields across the country. (screenshots from Twitter)

AMES, Iowa — A new research study conducted by Iowa State University Extension and Outreach faculty and researchers, as well as several other partnering universities across the country, illustrates the efficacy of mapping and identifying the spread of pests and pathogens using the social media application, Twitter. The study is available online through the American Phytopathological Society and will be featured in Plant Disease, the society’s international journal of applied plant pathology.

The research, “Scout, Snap, and Share: First Impressions of Plant Disease Monitoring Using Social Media,” examines the usefulness and feasibility of social media as a method of disease and pest data sharing among crop scouts, industry agronomists and university extension across the country. During the observation period between 2016 and 2017, two Twitter accounts, @corndisease and @soydisease, were created to track the appearance of disease in corn and soybean fields across the country. Participants tweeted an image of the disease they found, along with the state and county of observation, and included either the @corndisease or @soydisease account.

The project was able to successfully track the movement of southern rust (caused by Puccinia polysora) of corn northward, giving advance notice for targeted crop scouting efforts. Through the reports, stakeholders were later able to produce maps pinpointing disease spread.

“The use of Twitter to create a virtual and ongoing discussion and reporting location for diseases and pests can be a useful tool for integrated pest management,” said Daren Mueller, assistant professor and extension specialist in plant pathology and microbiology. “Through social media, we are able to connect stakeholders who are miles apart with information that could potentially preserve yields and encourage responsible crop and pest management.”

To view additional findings in the project, visit the link above.

Funding for this project was provided by the United States Department of Agriculture National Institute of Food and Agriculture through the Integrated Pest Information Platform for Extension and Education Cooperative Agricultural Project.