Home / New England / Maple syrup season gets early start in areas
A new user experience is coming! We'll be asking you to login to your Morning Ag Clips account March 1st to access these new features.
We can't wait to share them with you! Read more here. 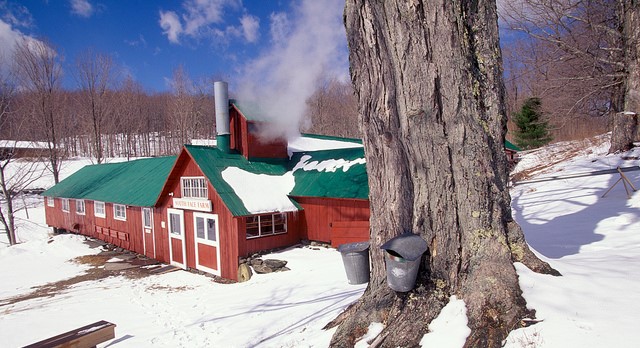 Some producers in Vermont, the country's largest producer of maple syrup, have been going strong and producing a fair amount since about mid-February, but historically the season has been later, said Matt Gordon, executive director of the Vermont Maple Sugar Producers Association. (Massachusetts Office of Travel & Tourism, Flickr/Creative Commons)

EAST MONTPELIER, Vt. (AP) — The annual maple season got off to another early start with warmups in parts of New England, and producers are hopeful the recent cold and snow will extend it.

Some producers in Vermont, the country’s largest producer of maple syrup, have been going strong and producing a fair amount since about mid-February, but historically the season has been later, said Matt Gordon, executive director of the Vermont Maple Sugar Producers Association.

“It’s a little disturbing that we’re starting so early. It’s getting to be the norm almost,” said Doug Bragg, of Bragg Family Farm Sugarhouse & Gift Shop in East Montpelier. “But the thing is that when it starts early, you know it’s going to get cold again, so you almost, so far, you get kind of two shots at it. It’s almost like a second little season,” he said while boiling sap in the sugar house last week.

It takes warm days and freezing nights for sap to flow in maple trees. But when temperatures get too high, the season abruptly ends with the appearance of buds on maple trees.

According to the U.S. Department of Agriculture, the maple season has started in early January in the past three years in Vermont but historically has started in late February. That’s largely due to technology such as tubing and vacuum sap collection systems that allow producers to take advantage of January and February thaws, said Gary Keough, state statistician with the USDA National Agricultural Statistics Service in Concord, New Hampshire.

More sugar makers are getting their taps in earlier, so they’re ready for those early sap flows, according to the Vermont Maple Sugar Makers Association.

Producers along the coast and in southern New Hampshire had early sap runs during late January and early February, according to Jim Fadden, president of the New Hampshire Maple Producers Association.

In Maine, however, some syrup makers are just getting started in the northern part of the state.

To the south, others are afraid the season is just about over.

“The fear is that it’s so warm that the season will end soon,” said Michael Bryant, of Hilltop Boilers Maple Syrup in Newfield, in southern Maine.

He said he would like to see the season go another two weeks, but that probably won’t happen in his region.

The Maine governor’s annual ceremonial tree-tapping event is on March 20. “We’ll be done making syrup before then,” he said.

In northwestern Pennsylvania, it’s been too cold for sap to run in recent days, but producers are expecting prime temperatures at the end of the week.

“What we really need is the warm days, say 42 degrees, cold nights, below 28; that helps keep the sap running nice,” said Bill Phillips, of Fort LeBoeuf Maple in Waterford, Pennsylvania, and president of the Northwest Pennsylvania Maple Association.