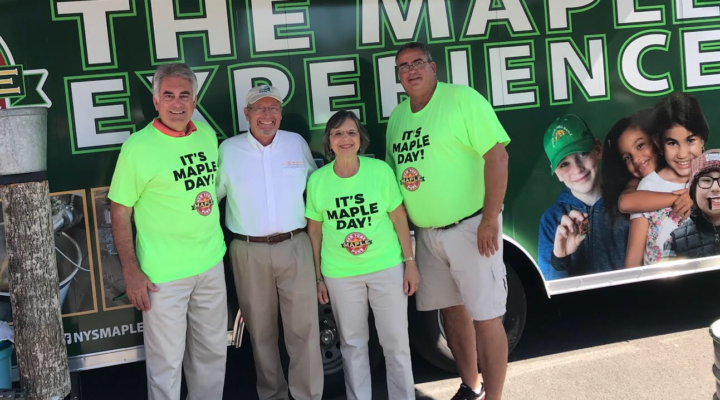 SYRACUSE, N.Y. — As the second-largest producer of maple in the nation, New York State celebrated the sweet agricultural commodity Monday at the Great New York State Fair. As part of “Maple Day at the Fair,” the NYS Maple Producers’ Association and Assemblywoman Donna Lupardo unveiled the brand new Maple Experience mobile exhibit. The traveling unit will provide demonstrations and tastings throughout the state.

“Maple production in NYS has doubled over the last ten years and is a major part of our agricultural economy,” said Assemblywoman Lupardo, Chair of the Assembly Committee on Agriculture. “I made sure this new unit received funding in this year’s budget so that people from across the state could learn more about the maple industry.”

“Maple is one of the fastest growing industries in New York and it’s important for people to learn more about where these products come from,” said Keith Schiebel, Maple Support Specialist for the NYS Maple Producers’ Association. “We’re very excited to be able to use the Maple Experience to share real, pure maple syrup and related products with people in all corners of the state, especially students.”

The 2019-20 State Budget includes $288,000 for the NYS Maple Producers’ Association, $63,000 of which was allotted to expand educational outreach throughout the state. Additionally, $125,000 was included in the final budget for Cornell University Maple Research that will further assist the industry.

New York farmers produced 800 thousand gallons of maple in 2018, nearly double the amount from ten years ago; the industry generates an estimated $141 million in economic impact each year. The state is home to the largest resource of tappable maple trees within the United States, and more than 2,000 maple sugarmakers.

–The Office of Assemblywoman Donna Lupardo