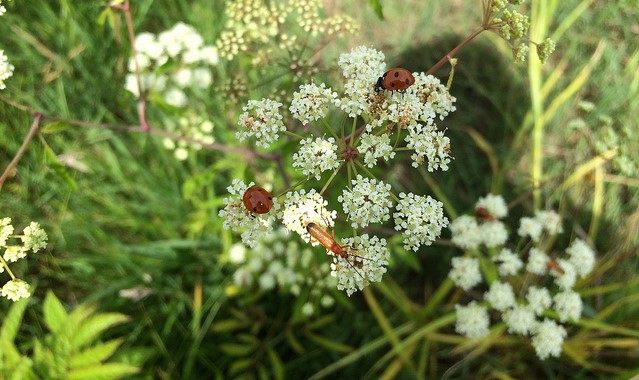 Some plants, like water hemlock (pictured, above), "can kill a cow in 15 minutes, while others, like buttercups, just leave a burning sensation in their mouths or tongues," said Donna Foulk, an Extension educator with Penn State University. (Aaron Volkening, Flickr/Creative Commons)

WASHINGTON — Not all plants are wholesome for foraging animals.

Certain species of milkweed, for example, that are highly valued as host plants for the dwindling monarch butterfly population, are extremely poisonous to pets and to range animals like sheep, cattle and goats. Even free-ranging chickens aren’t immune. Among potentially toxic poultry pickings are castor beans and certain mushrooms, although chickens don’t eat them as readily as do animals.

Plant toxicity is directly related to dosage. How many were eaten, how healthy was the animal, how long do the toxins persist and what can be done?

Some plants, like water hemlock, “can kill a cow in 15 minutes, while others, like buttercups, just leave a burning sensation in their mouths or tongues,” said Donna Foulk, an Extension educator with Penn State University.

Ornamental plants either in or outside the home are frequently toxic, she said.

Animal poisoning can be tough to diagnose, but symptoms range from difficulty breathing to refusing food, blistering and skin lesions to dizziness and diarrhea. Call a vet immediately if such conditions arise.

Many weed varieties aren’t toxic unless environmental conditions make them so. “If plants pick up a lot of nitrogens from rain and rapid growth, and animals eat a lot of them, they can die,” said Mark Renz, a University of Wisconsin Cooperative Extension weed scientist.

Most of those weeds are unpalatable to animal taste buds but often are eaten when dried and mixed with other materials, like in a hay bale.

“I know of a case where a llama died from eating baled hay that had milkweed in it,” Renz said.

Pet owners may know that daffodil, tulip and hyacinth bulbs can be potentially poisonous to weed-grazing dogs, while Asiatic lilies can cause kidney failure in plant-eating cats.

But people new to small scale or urban farming may not be aware that the roots and seeds of cabbage and broccoli can trigger digestive problems in pigs; foxglove or digitalis can produce irregular heart rates and rhythms in horses; rhubarb and tomato leaves can cause neurological damage to rabbits; iris rootstocks can result in breathing problems and scours in cattle; and as few as three medium to large oleander leaves can be lethal to llamas.

What can be done to limit plant poison risks?

“Try to know what’s out there — what’s toxic, and their symptoms,” Renz said.

— Eliminate or fence around any poisonous plants or trees in and adjacent to pastures.

— Do not throw garden or lawn clippings into pastures and do not plant trees, ornamental shrubs or plants near barns or pastures.

It can be risky to let dogs and cats wander around lawns or gardens after herbicides and pesticides have been applied. “But in most urban settings, most of the chemicals have been tested and are fairly innocuous,” Renz said.