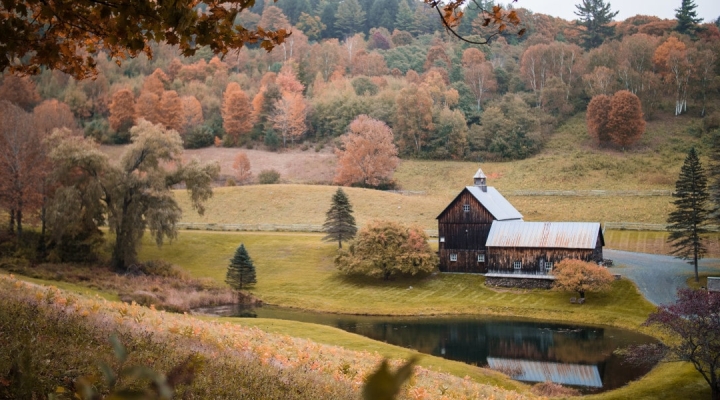 New research co-authored by Jessica Leahy, professor of human dimensions and natural resources at UMaine, shows that when it comes to keeping rural youth in forested rural communities — like the ones prevalent throughout Maine — fostering connections to the land and community may be even more important than simply providing jobs in the area. (Photo by Eric Chen on Unsplash)

ORONO, Maine — Rural areas centered around the forest industry have faced uncertain economic times. Global competition, coupled with the decline of print media and national recessions, have decreased the demand for traditional paper and lumber products. While some forest-dependent communities have thrived in transitioning to focus on industries like nature-based tourism rather than manufacturing, others have stagnated — and, with that, have struggled to convince their youth to stay.

New research co-authored by Jessica Leahy, professor of human dimensions and natural resources at UMaine, shows that when it comes to keeping rural youth in forested rural communities — like the ones prevalent throughout Maine — fostering connections to the land and community may be even more important than simply providing jobs in the area.

In the study published in the journal Community Development, researchers analyzed over 2,000 survey responses from middle and high school youth from traditionally forest-dependent communities in greater Piscataquis County, Maine, and Coos County, Oregon. The survey looked at the subjects’ perceptions of their schools and community, connection to the outdoors and educational aspirations. They compared data to the students’ desired future residential location — specifically, whether they planned to stay in a rural area or move to a nonrural area.

School perceptions, extracurricular involvement, academic grades, income and demographics like gender, race or ethnicity did not have a statistically significant relationship with youth residential aspirations. No significant differences in residential aspirations were found between high school students who perceived their local economy as getting worse and those who perceived the economy as staying the same or improving, either.

Notably, Maine’s rural youth were more likely to want to live in a rural place than study subjects from Oregon.

“We suspect that students in Piscataquis County want to live in a rural place when they grow up because of the cultural emphasis on rural living in Maine. Oregon is also more urban overall,” says Leahy, who co-authored the article with researchers from Oregon State University, University of Alaska Fairbanks, University of Georgia and James Madison University.

The researchers concluded that rural forest-dependent communities concerned about the sustainability of their communities may better retain or attract rural youth by focusing on community attributes and connections to the outdoors. Policies are often developed to recruit young workers to rural locales, but without fostering attachments, simple economic incentives are not enough to keep them there.

“Piscataquis County is doing all the right things by having lots of outdoor opportunities and groups like the Piscataquis County Soil and Water Conservation District and Appalachian Mountain Club who encourage youth to get outdoors. There’s also a focus on positive community attributes through their economic development efforts, the new ice arena and in-town programming for youth. They’re headed in the right direction to encourage youth to stay in their community or return at some point in the future,” Leahy says.