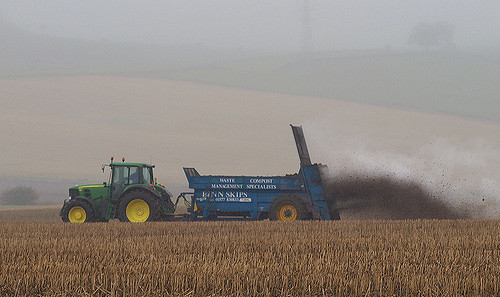 Land application of manure and other organic materials supplies much N to Nebraska's crop production. (B4bees via Flickr)

LINCOLN — Land application of organic materials is important in Nebraska. This article builds on an earlier CropWatch article. Since then, the data were further analyzed and the results further interpreted. This article avoids much repetition of the 2019 article but gives some new or revised information.

Research was conducted at six sites for three years and two sites for two years in which the organic N availability was assessed and sensor-directed in-season N application was fine-tuned involving a comparison of six livestock manures, three municipal biosolid (treated sewage) products and an industrial by-product. All were solids.

The average fertilizer-N equivalence of applied organic N was 44% for the first crop, 21% for the second crop, and 10% for the third crop after manure application (44-21-10) for a total of 75% availability during the three years following application. For comparison, with current UNL recommended equivalences for organic N in year 1, 2 and 3 after application are:

The current estimates of organic N availability which are lass than 20 years old are intentionally conservative to protect against yield loss, such as due to uneven application. However, manure application equipment and awareness has improved for much more uniform application. The manure N credit can be increased for maximizing profit and reduced loss of N to the environment such as nitrate-N leaching to aquifers and emission of nitrous oxide. If such losses are of sufficient environmental concern, the manure N credits may be even greater than the 44-21-10 due to the variations in availability across locations and years.

There was much variation in the fertilizer N equivalence across site-years but, on average, it was similar for all of the organic materials tested although these differed for C:N ratio and the hemicellulose, cellulous, and lignin contents. On average the fertilizer-N equivalence of applied organic N was similar for rainfed and irrigated fields but greater for lower (< 3%) soil organic matter sites compared with higher (> 6%) soil organic matter sites.

Sensor-directed in-season N was most accurate with