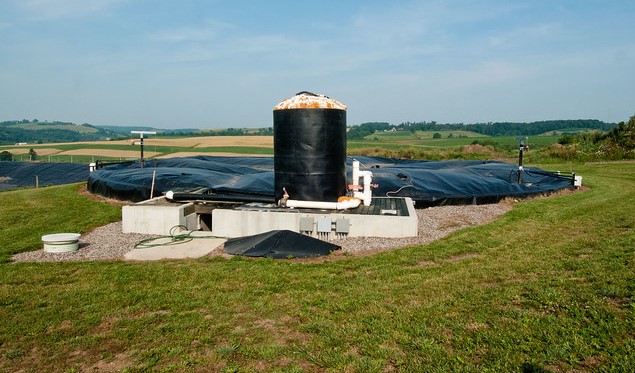 The digester, which is being constructed as a partnership of the college, the farm, Vermont Gas Systems and Vanguard Renewables, will be the largest of its kind in Vermont. (Stock photo, U.S. Department of Agriculture, Flickr/Creative Commons)

SALISBURY, Vt. (AP) — Construction is underway at a Vermont dairy farm on a system that will turn cow manure and food scraps into renewable natural gas to help Middlebury College meet its goal of getting 100% of its energy from renewable sources and provide extra income for the farmer.

The groundbreaking for the anaerobic digester was held Tuesday at the Goodrich Family Farm in Salisbury.

“We constantly seek innovative ways to be good stewards of the land and practice sustainable and viable agriculture,” said Chase Goodrich, who is among the fourth generation of his family to operate their farm, which now milks about 900 cows. “The digester will help to continue to make this possible.”

The digester, which is being constructed as a partnership of the college, the farm, Vermont Gas Systems and Vanguard Renewables, will be the largest of its kind in Vermont.

A statement distributed by the college said the system would process 100 tons of manure and 180 tons of organic food waste a day into renewable natural gas.

Middlebury College, which is working on a plan to meet all of its energy needs from renewable sources by 2028, is planning to buy the bulk of the gas that will be produced by the digester. Once the digester is in operation it will supply about half the energy that Middlebury uses for heating and cooling. The college’s biomass plant will produce the other 50%. Both sources provide some of the college’s electricity.

Vermont Gas has begun construction on a 5-mile (8-kilometer) pipeline to connect the farm with its distribution network.

The Great Wisconsin Cheese Giveaway
May 13, 2021