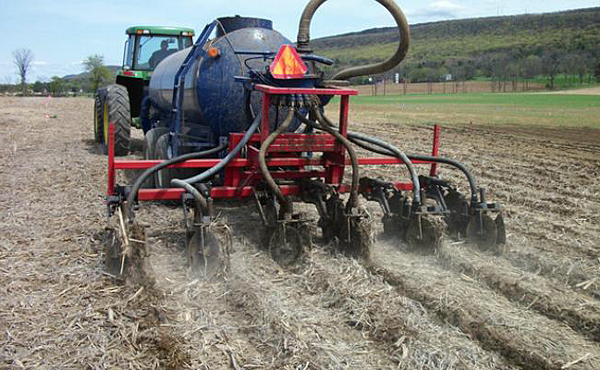 Dairy farmers in the Northeast can improve water quality and boost the profitability of their operations by changing the timing and method of applying manure to their fields in the fall, along with planting rye as a cover crop between corn crops — or by double-cropping rye and corn, according to researchers with Pennsylvania State University. (Penn State University)

UNIVERSITY PARK, Pa. — Dairy farmers in the Northeast can improve water quality and boost the profitability of their operations by changing the timing and method of applying manure to their fields in the fall, along with planting rye as a cover crop between corn crops — or by double-cropping rye and corn, according to researchers with The Pennsylvania State University.

In a two-year study at Penn State’s Russell E. Larson Agricultural Research Center, researchers compared the effects on nitrogen conservation of three field-management options that could be implemented by farmers, to determine whether new strategies would yield environmental and crop-production benefits.

In a “three-factor factorial experiment,” researchers compared injecting manure into the soil versus broadcasting it on the surface; planting rye as a winter cover crop versus allowing the rye to grow longer in the spring and harvesting it as forage, and applying manure before the cover crop is planted in September — after the harvest of corn for silage — versus waiting until November to apply the manure into the established rye crop, Penn State explained in its announcement.

The results indicate that dairy farmers can take advantage of win-win opportunities, according to Heather Karsten, associate professor of crop production ecology. By incorporating a few changes into their operations, they can produce more feed for their cattle and reduce the amount of nitrogen lost from their fields.

Karsten, whose research group in the Penn State College of Agricultural Sciences conducted the study, pointed out that the research is rooted in both practical and environmental considerations: Dairy farmers typically are limited to six months of manure storage, requiring them to apply manure spring through fall. In the fall, however, there is a higher risk of water quality impairment if manure is applied to bare ground and can be washed into streams by precipitation, she added.

“Fall manure applications are of particular concern in the Chesapeake Bay drainage, where agricultural sources have been identified as a primary contributor of phosphorus and nitrogen to the bay, causing hypoxic conditions that threaten aquatic organisms and overall water quality,” Karsten said. “To comply with total maximum daily load limits set for the bay by the U.S. Environmental Protection Agency, farmers must reduce runoff of nitrogen, phosphorus and sediment.”

Findings of the research, recently published in Agronomy Journal, suggest that the best environmental and economic outcomes can be achieved together, the researchers said.

According to lead researcher Rachel Milliron, a master’s degree student when the study was conducted, now a Penn State Extension educator specializing in agronomy, the research identified multiple strategies that farmers can use to produce forage with fall manure and protect water quality. She explained that two practices and combinations of the practices consistently rose to the top — harvesting the rye for forage compared to terminating for cover and injecting manure versus surface broadcasting.

Allowing rye to grow 10-11 days longer in spring resulted in three- to four-fold greater rye biomass for forage, and two- to three-fold more manure nitrogen in the rye biomass that is removed in the forage, Milliron said. Despite delayed planting of the subsequent corn crop, the double-crop rye forage/corn silage system also produced more total forage — rye forage and corn silage — than the rye cover/corn silage system when the manure was applied in September.

When manure is left on the soil surface, nitrogen can be lost as volatilized ammonia gas, but manure injection can conserve this nitrogen in the soil. The researchers found that injecting manure versus surface broadcasting in September conserved manure nitrogen to produce more subsequent corn silage after a rye cover crop. When the rye was harvested for forage, September manure injection also increased rye forage yield and nitrogen in the rye and produced more total forage — rye forage and corn silage.

However, to make the best-case scenario work, dairy farmers must have access to and be able to afford manure-injection equipment. Also, as with all strategies related to farming, weather can foil the best-laid plans for nitrogen conservation, Karsten warned. The double-crop, field-management strategy includes tight windows for farmers to harvest one crop and plant the next one.

“So, a lot of rain at critical harvest times can make muddy fields inaccessible, and could prohibit the double-cropping strategy,” she said. “However, with the growing seasons lengthening, we believe this strategy can be a real asset to Northeast dairy farmers.”

Also involved in the research was Douglas Beegle, emeritus distinguished professor of agronomy.

The U.S. Department of Agriculture’s National Institute of Food and Agriculture supported this research.

Annual Youth Dairy Days to be held virtually
May 26, 2020