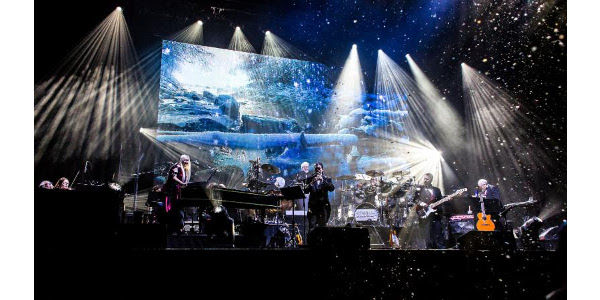 Mannheim Steamroller will present the best the holiday has to offer this season. The group will perform live at the Clay County Regional Events Center on Tuesday, November 19. Tickets for the event will go on sale July 26. (Courtesy of Clay County Fair & Events Center)

SPENCER, Iowa — Mannheim Steamroller will present the best the holiday has to offer this season. The group will perform live at the Clay County Regional Events Center on Tuesday, November 19. Tickets for the event will go on sale July 26.

“Attending Mannheim Steamroller at the Events Center is a tradition in northwest Iowa,” said Fair & Events Center CEO Jeremy Parsons. “We hope everyone will celebrate ‘Christmas in July’ and buy tickets for this great show.”

Chip Davis, founder and creator of Mannheim Steamroller, will celebrate the 35th Anniversary of his annual Christmas concert tour, making it the longest running consecutive concert tour in the entertainment industry.

This year’s show will feature the original classic Christmas hits from the first Mannheim Steamroller Christmas along with multimedia effects in an intimate setting. Davis will direct and co-produce Tour performances with MagicSpace Entertainment.

Mannheim Steamroller Christmas by Chip Davis is co-produced by MagicSpace Entertainment. The company is headed by Lee D. Marshall, Joe Marsh, John Ballard, and Steve Boulay and has been producing and presenting national tours, Broadway shows, concerts and museum exhibits worldwide for over 35 years. They have an office in Park City, UT. www.magicspace.net

Tickets will go on sale Friday, July 26 at 10:00am. Prices are $74 and $59 (reserved seating). A “Holiday Cheer” option that includes a pre-show party with unlimited food and drink is available for $20 (limited number available). Tickets will be available online at www.midwestix.com, by phone at 515-244-2771, or in person at the Events Center Box Office.

His first Christmas album in 1984, revolutionized the making and marketing of holiday music, the album’s success made Christmas records a “must do” for all music artists. With more than 29 million Christmas albums sold, Davis is the #1-selling Christmas artist of all time with Elvis coming in at a distant 17 million holiday records sold. Having 19 gold, 8 multi-platinum and 4 platinum-certified records, Davis is among an elite group of music artists with this number of RIAA records. He is also one of the most successful entrepreneurs in the music industry, offering a rich array of lifestyle products on www.mannheimsteamroller.com including hot chocolate, food, apparel and novelty items. His latest achievement is creating a cutting edge psychoacoustic technology that is being used in major medical institutions such as Mayo Clinic.