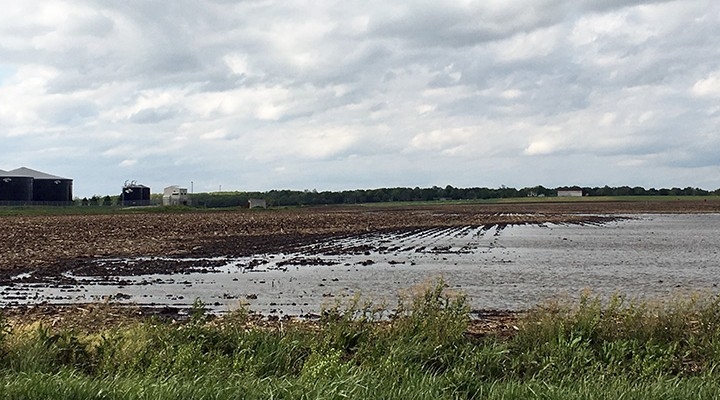 With less than half the corn crop and less than a fourth of the soybean crop planted by June 1 this year, Illinois farmers are facing some difficult decisions. (Lauren D. Quinn)

URBANA, Ill. – With less than half the corn crop and less than a fourth of the soybean crop planted by June 1 this year, Illinois farmers are facing some difficult decisions. Emerson Nafziger, of the Department of Crop Sciences at the University of Illinois, answers critical questions.

Q: How serious is the problem?

A: The entire state of Illinois received above-normal rainfall in May, ranging from 1 to 2 inches above normal in the southeastern edge of the state to as much as 8 inches above normal in northwestern Illinois. Some areas had some planting days early, but there have been no wider windows across the whole region to get the crop planted.

“A short break from rain the last few days of May has allowed some planting, but many fields remain wet, some have water standing, and there is no expectation that things will dry up soon to allow widespread planting,” Nafziger says.

Q: Won’t driving on soils that are still wet compact the soil so badly that yields will suffer?

“That’s no longer the case in late May or early June, when every day of delay costs yield. We don’t want to get stuck in the field or plant where seedbed soil is too wet to crumble, but it makes sense to start planting even though we know heavy equipment will cause compaction. While the formation of a physical barrier to root growth isn’t desirable, compaction can actually help water to move from deeper in the soil to the roots,” Nafziger says.

Q: Should we “open up” soils by tilling them when they’re wet so that the surface dries out faster?

A: The capillary rise of water from deeper layers to the surface is disrupted by surface tillage, and that means slower water movement to the surface and faster drying of the surface soil. That also means that deeper layers stay wetter. Claypan soils in south-central Illinois already have a compacted zone, so driving on them to open up the soil may do little damage. Although it may make soils look drier on the surface, Nafziger notes, tillage of already-tilled or deep soils is unlikely to be beneficial.

Q: How do I decide whether to take prevented planting or to plant the crop even if it’s late?

A: Nafziger says a recent paper from Iowa State reported yield losses of about 25% (55 bushels) for corn planted June 10, 40% (88 bushels) on June 20, and 61% (133 bushels) on June 30. Therefore, planting corn on the last insurable date (June 25) would be expected to produce about half the normal yield. “There is some anecdotal evidence that yields could exceed those numbers, but for now that’s the best guess we have,” Nafziger says.

Q: Should I change corn hybrids or soybean varieties to ones with earlier maturity?

A: Maybe, says Nafziger. According to predictions based on growing degree days (GDD) left in the season after a given planting date, some hybrids, especially in northern Illinois, might need to be exchanged for shorter-maturing ones. “Because planting a hybrid late usually lowers its GDD requirement, it might still be safe to plant normal-maturity hybrids in central and southern Illinois, if planting can be done before mid-June,” he adds.

Because soybean flowering responds to photoperiod, varieties across the range of commonly-used maturities will flower at about the same time if planted in the second half of June. Therefore, Nafziger says, there is little need to change soybean varieties. However, he adds, north of I-80 in Illinois, producers should plant varieties no later than MG 2.8 or 2.9 if planting is delayed past mid-June.

“If July temperatures are normal, this might prove to be unnecessary, but cool weather (especially nights) in July could delay flowering to late July, and that could substantially delay maturity and push seed filling into less favorable conditions,” he says.

Q: What do we do about nitrogen fertilizer for corn?

A: “This is one of the really tough challenges, with such a wet May following a wet fall with limited nitrogen application and limited ability to apply nitrogen this spring,” Nafziger says. For fields that have been very wet, it’s likely that some of the nitrogen applied last fall or in early spring has moved down in the soil, and some may have left the field in tile drainage water. If soils dry in June, this movement will slow, and as plants begin to grow and take up nitrogen, some nitrogen may move back to the roots from deeper in the soil.

“We should wait until we see crop color and growth before deciding to add additional nitrogen, if the full amount has already been applied,” he says. According to the nitrogen rate calculator, corn following soybean should be supplied with about 180 lb nitrogen per acre in southern and central Illinois, and about 170 lb nitrogen per acre in northern Illinois (soil organic matter provides the rest). If nitrogen still needs to be applied to the crop, these rates should be used, taking care to apply fertilizer properly to avoid loss and crop injury.

If June ends up being as wet as May, producers may want to go back with another 30 to 50 lb nitrogen in the two or three weeks before tasseling, especially if growth and yield potential are good. “The crop itself is a better indicator of its nitrogen status than soil or tissue samples,” Nafziger says. “Having the crop take on a dark green color in mid-vegetative stages tends to indicate that it doesn’t need more nitrogen.”

Q: Should we adjust seeding rates or make other agronomic changes when planting this late?

A: Not for corn, Nafziger says, unless the initial target was to plant more than 38,000 to 40,000 seeds, in which case seeding rate should be lowered. For soybeans, the idea that narrow rows and higher seeding rates will help compensate for smaller plants hasn’t been fully supported by research, but it certainly makes sense to avoid low stands and the potential for incomplete canopies during seed fill. “We should have 115,000 to 120,000 plants regardless of planting date, and we should plant to make sure stands are at least that high,” he says.

Q: What about switching from corn to soybeans?

A: This is less an agronomic question than an economic one, involving crop insurance, current crop prices, and how much has already been invested in fields that were to be planted to corn. Nafziger says corn is the answer when considering corn prices relative to soybean prices; the fact that corn will not be planted as intended in some places (such as flooded river bottoms); and the fact that in some places in recent years corn planted in early June has yielded well. “It’s not an automatic decision to switch to soybeans when planting late like it might have been a few decades ago,” he notes.

Q: Is there any possibility that we could end up with good yields despite the start?

A: Trendline yields for corn and soybean in Illinois in 2019 are about 190 and 67 bushels per acre, respectively. “It’s too much even for an optimist to hope that actual yields in 2019 will reach those levels, but if we get the best weather possible—no temperatures above normal and not too many days below normal—and no lack of soil moisture ever during the growing season, we might hope to see yields in the vicinity of 90% of those trendline yields. Even that is an audacious hope, but we haven’t tested today’s hybrids and varieties under such conditions in the past five years, and we can hope to be surprised at what they can do,” Nafziger concludes.