Home / Kentucky / Managing soybean cyst nematode
A new user experience is coming! We'll be asking you to login to your Morning Ag Clips account March 1st to access these new features.
We can't wait to share them with you! Read more here. 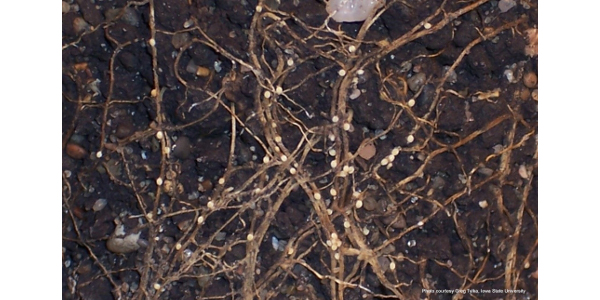 LEXINGTON, Ky. — The soybean cyst nematode (SCN) (Figure 1) causes greater annual yield losses in Kentucky than any other pathogen of soybean.  The last time a formal survey was conducted by the University of Kentucky in 2006 and 2007, approximately 76% of soybean fields in the state were infested with SCN.  Preliminary results from a new on-going SCN survey initiated in 2019 show that 84% of Kentucky fields are infested with SCN.  Although above-ground symptoms (stunting and yellowing) caused by SCN can occasionally be observed, affected soybean plants generally appear to be healthy.  Unfortunately, “healthy-looking” soybean plants that are infected by SCN can still have a 30% yield reduction.

Management of SCN has gotten much more complex in the last few years, since SCN populations have adapted to the use of SCN-resistant soybean varieties.  The primary source of SCN resistance used by commercial soybean breeding programs came from a soybean germplasm line known as “PI 88788”.  This source of resistance was highly effective in managing SCN for several years, but prolific use of soybean varieties with the PI 88788 background has selected for SCN populations that are able to overcome this source of resistance.  In the 2006-2007 University of Kentucky SCN survey, the PI 88788 source of SCN resistance was not very effective against approximately 60% of the SCN populations in Kentucky, making management of this pathogen much more complex than before.

As complex as it is, management of SCN is still doable, and is important for maintaining and increasing soybean yields.  Below are the main steps for managing SCN: