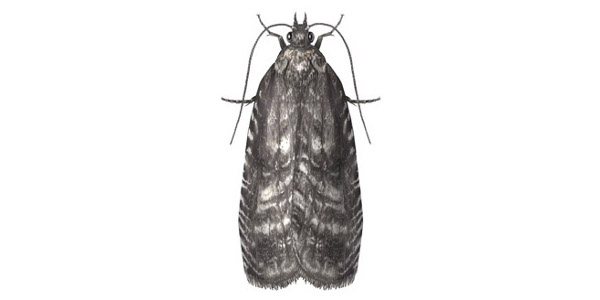 What is mating disruption?

Mating disruption relies on the insect’s own mate-finding abilities to prevent or greatly reduce the number of successful unions between male and female moths. By impeding the number of successful matings, fewer eggs are laid, leading to fewer larvae (worms) and less chance of fruit injury. When female oriental fruit moth prepare to mate, they let the males know by releasing a chemical called pheromone, which is active at extremely low concentrations and specifically attractive to just male oriental fruit moth. This “scent” floats through the air as a plume that the male finds with the use of his antennae, locating the female and mating with her.

Mating disruption products work by adding large quantities of synthetic pheromone to the orchard in a manner that either outcompetes calling females for the attention of males or impairs the ability of the male to respond to the pheromone in a normal manner. Disruption of oriental fruit moth can occur via either of the two principal mechanisms, depending on the release rate of pheromone from each dispenser. In both scenarios, control is achieved because males cannot locate females and mating gets disrupted.

Orchard shape and size are important considerations when implementing a mating disruption program. The ideal orchard would be square to rectangular and at least 5 acres in size. Long, narrow orchards have too much “edge,” which is not ideal for effective mating disruption due to dilution of the pheromone at the edges and the increased opportunity for mated females to move from nearby, non-disrupted orchards into the pheromone-treated block.

Orchards that are very young and do not have a well-developed canopy are not great candidates. Additionally, an orchard with many missing trees is not ideal for mating disruption. The best strategy is to apply mating disruption on a whole-farm or area wide basis. This approach entails growers applying pheromone to all of their stone and pome fruit plantings and convincing neighboring growers to do the same.

An effective oriental fruit moth disruption program also requires monitoring with pheromone-baited sticky traps. If the male moths can find the traps, then it is likely they can also find the calling females and mate with them. Thus, if oriental fruit moth are not captured in traps, this is an indication that the mating disruption program is working.

The reliability of the monitoring program increases as more traps are deployed. The minimum trapping density is three traps in smaller blocks (less than 10 acres) and five traps in larger blocks. At least one trap should be placed close to a border. A few oriental fruit moth are often captured in border traps, as pheromone coverage on borders is sometimes lower and less uniform than required for complete disruption. If moths are captured on the border, inspect trees for signs that larvae have entered shoots, (i.e., flagging or shepard’s crook) or fruit damage and apply a border spray of insecticide if an infestation is detected.

Oriental fruit moth damage to shoots is a more direct measure of mating disruption success than monitoring male moth capture in traps and should be assessed even when no moths are caught. Shoot counts are an especially important measure of efficacy early in the season. Examine 20 shoots on 20 trees per block, looking for flagging or other signs of damage. An insecticide spray is likely needed if 1 percent or more of the shoots are infested or if fruit damage is detected.

Each option is effective and the choice comes down to which alternative best fits into your orchard management plan. Considerations for each option are shown in the table below.

Hand-applied dispensers are the most widely used products for oriental fruit moth disruption. As the name implies, they are manually placed in trees at densities of 100-200 devices per acre. In orchards with canopy heights of less than 12 feet, dispensers can be applied at mid-canopy (7-8 feet). In orchards with taller trees, apply at least half of the dispensers in the upper third of the canopy. Place dispensers on sturdy branches to ensure they remain at the desired height throughout the season. Inform workers about the presence of dispensers so they do not remove them during spring pruning.

Dispensers are commonly put in the trees in the spring prior to the first oriental fruit moth flight. There is also the option of treating the first generation with insecticides and then applying the dispensers a few weeks later. However, the spring pheromone application is most effective, especially if combined with a single insecticide spray. Some dispensers will last season-long (about 120 days), while others will need to be applied a second time after about 80 days. Refer to the product label.

Apple growers will likely have to contend with oriental fruit moth and codling moth. An option for disrupting the two pests is to use a hand-applied product that contains the pheromone of both species. The application rate for codling moth is typically higher than that for oriental fruit moth. Thus, it may be more economical to apply the dual product at the lower rate of 100-200 dispensers per acre and then supplement the treatment with an additional 100-200 codling moth only dispensers.

Sprayable products consist of pheromone encapsulated in microscopic polymer capsules from which the pheromone is slowly released over time. Several million capsules are applied per acre that together deliver 9-20 grams of pheromone over a period of three to five weeks, depending on environmental conditions. Shorter longevity occurs when pheromone release is accelerated by high temperatures or capsules are washed off foliage by rain.

Sprayable pheromone will have a range of active ingredient strengths listed on the label, allowing for several options to manage oriental fruit moth. A single high-rate application at the start of each generation’s flight may provide generation-long disruption. Two applications will probably be required if emergence is prolonged, it rains or during hot summer periods.

A proven alternative to applying a higher rate once or twice per flight is to use the lowest labeled rate and apply more frequently, say every seven to 10 days. This ensures a fresh supply of pheromone is present even when rains have washed away earlier sprays. A third option is to use insecticides supplemented with one or a few targeted pheromone applications when high moth captures are recorded in traps.

A low-density approach stores and releases the pheromone via aerosol emitters that dispense large quantities mechanically. These devices provide a controlled constant release rate and a stable environment for the pheromone prior to its release. Each unit releases milligram quantities of pheromone every 15 minutes over a 9- to 12-hour cycle. Aerosol emitters for oriental fruit moth are deployed at a density of 1 unit (up to 2 per acre in heavily infested orchards) prior to the start of the first adult flight. An aerosol product that emits the pheromones of both oriental fruit moth and codling moth is also available and is deployed at a density of 1-2 per acre.

One concern with using this technology is that the mechanical failure of a unit would leave large areas unprotected. Thus, it is a good idea to routinely inspect the devices to make sure they are functioning properly. Another potential weakness is the low deployment density may leave areas of little or no pheromone coverage, especially on borders, where mate-finding might occur. Since edges can be problematic in aerosol-treated crops, emitters are generally hung in the upper canopy to facilitate spread of the aerosol across the orchard. Treating large contiguous areas of 40 acres or more is recommended for the best results and supplemental treatment of the perimeter with hand-applied dispensers can help protect borders.

Dr. Gut’s work is funded in part by MSU‘s AgBioResearch.

Making your real Christmas tree last through the holidays
December 1, 2021

Slugs and snails, destructors of crops and gardens, could be controlled by bread dough
August 26, 2021