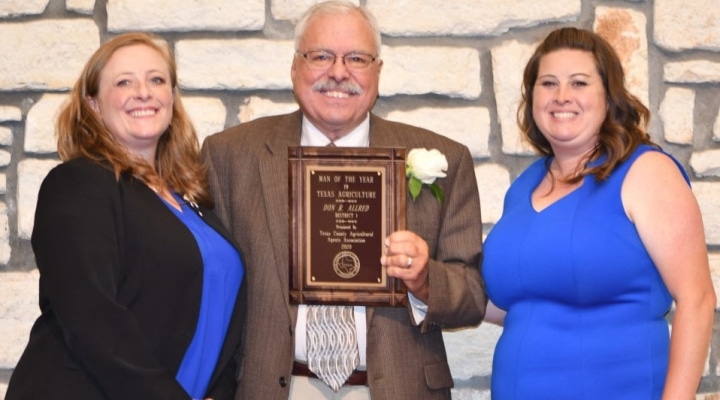 Man of the Year Awards

TCAAA bestowed Man and Woman of the Year in Texas Agriculture awards to individuals in recognition of their outstanding leadership in agriculture or agribusiness as well as their support of AgriLife Extension educational programming efforts. Awardees and their related districts were:

District 1 – County Judge Don Allred has served as the Oldham County judge for the past 29 years. He has been a supporter of agriculture and especially AgriLife Extension programs all his life, believing in the importance of the agency’s education, both at the adult level and through its youth programs.

District 1 – Ross Wilson is president and CEO of Texas Cattle Feeders Association, headquartered in Amarillo. Wilson has been a volunteer adult leader for the Randall County 4-H youth programs, where his two children were actively involved in Randall County’s 4-H horse program and also exhibited lambs.

District 3 – Doug and Jill Dunkel live on the family ranch in Archer City. The Dunkel family are huge supporters of the entire 4-H program where they and their children have been involved in almost every aspect. Doug Dunkel serves on the local youth livestock board and is a huge supporter at the district and state horse shows, where he assists by providing cattle, setting up patterns and helping youth.

District 5 – Linda Jordens Galayda operates Jordens Cattle Company, a commercial Brangus cow/calf ranch in Anderson County, which is part of the 7-7 Ranch Family Limited Partnership. She serves on the Beef and Forage Committee and Ag and Natural Resources Advisory Board in Anderson County.

District 7 – Ken Jordan leads the family business, Jordan Cattle Auction, which has been an integral part of the cattle industry in the Texas Hill Country area, as well as in Texas and nationally. Jordan contributes his facilities, knowledge and time to AgriLife Extension across county, district and regional programming efforts.

District 9 – Vince Patranella will be celebrating 50 years with Brazos Bottom Crop Care in 2021. In those 50 years he has hired more than 200 Texas A&M University students, some being sons and daughters of original student employees who have gone on to be successful in various agricultural fields.

District 11 – Charles Ring Jr. has long been an advocate of AgriLife Extension. He serves on the Crops Committee and cooperates with county dryland corn trials, as well as grows both irrigated and dryland corn trials for the Crop Testing Lab in College Station.

Specialists of the Year

David Anderson, Ph.D., AgriLife Extension economist in the Department of Animal Science, College Station, has offered many different programs related to livestock marketing and food marketing workshops for agency clientele. Most recently he has given various updates to clientele on the beef cattle industry and the COVID-19 pandemic.

Awards presented by the National Association of County Agricultural Agents, NACAA, during the state event, included the Distinguished Service Award, the highest award a county extension agent can receive from the national association. Recipients must be with the agency for at least 10 years and are selected based upon outstanding professional growth, program effectiveness, leadership ability, loyalty to work and community involvement.

All Distinguished Service Award recipients will be honored at the NACAA Annual Meeting and Professional Improvement Conference Sept. 29-Oct. 1 in Virginia Beach, Virginia.

AgriLife Extension personnel also received the national level Achievement Award, which is presented annually by the NACAA to recognize agents with less than 10 years of service for their outstanding professional growth and contribution to Extension. Achievement Award recipients also will be honored at the NACAA conference.

As Paul Harvey would say: Here is the rest of the story