Home / Illinois / Male weeds may hold key to own demise 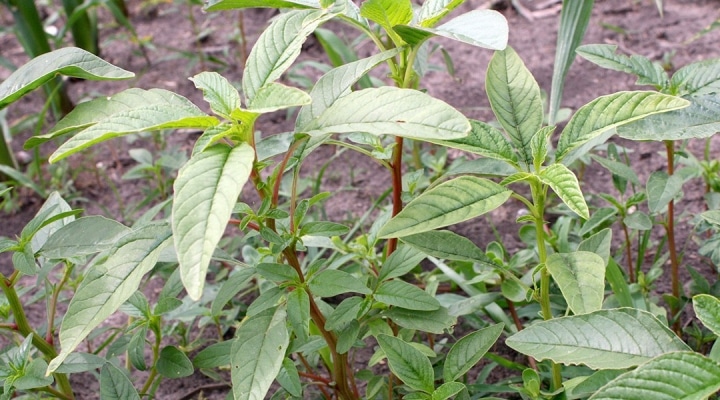 Scientists are getting closer to finding the genes for maleness in waterhemp and Palmer amaranth, two of the most troublesome agricultural weeds in the U.S. Finding the genes could enable new “genetic control” methods for the weeds, which, in many places, no longer respond to herbicides. (Courtesy Photo)

URBANA, Ill. — Scientists are getting closer to finding the genes for maleness in waterhemp and Palmer amaranth, two of the most troublesome agricultural weeds in the U.S.

Finding the genes could enable new “genetic control” methods for the weeds, which, in many places, no longer respond to herbicides.

“If we knew which genes control maleness and we could make those genes proliferate within the population, every plant in the field would be a male after a few generations, and theoretically, the population would crash,” says Pat Tranel, professor and associate head in the Department of Crop Sciences at the University of Illinois and lead author on a study in New Phytologist.

Tranel and his colleagues had previously identified molecular markers associated with the male genomic region. After sequencing male genomes for both species, the researchers were able to use those markers to zero in on the male-specific region. Now, they are within 120 to 150 genes of finding their target.

“We’re confident most of those 120 or so genes are probably doing nothing. It’s just stuff that’s accumulated in that region of the genome,” Tranel says. “If I had to guess, I’d say maybe 10 of them are actually doing something relevant.”

Narrowing down the genes related to gender in these weeds could have practical value for control, but the study also sheds light on the phenomenon of dioecy – male and female sexual organs on separate individuals – more generally. The vast majority of animals are dioecious, but it’s rare in plants. More than 90% of flowering plants have both sexual organs on the same individual, and often within the same flower.

Waterhemp and Palmer amaranth, however, are dioecious.

Dioecy means it’s impossible for a plant to self-pollinate; instead, female gametes must be fertilized by male pollen from another plant. That’s a good thing for ensuring genetic diversity in a population. And it’s likely what has made waterhemp and Palmer amaranth so successful at evading the detrimental effects of multiple herbicides.

“To date, waterhemp and Palmer amaranth have evolved resistance to herbicides spanning seven and eight modes of action, respectively. Dioecious reproduction results in all these resistance traits being mixed and matched within individuals. This mixing has allowed populations of both species to combine multiple herbicide resistances, leaving producers with few effective herbicide choices,” Tranel says.

Understanding the rare phenomenon of dioecy in plants can help scientists piece together how traits are inherited from each parent, and to understand how the phenomenon evolves.

Unlike in animals, in which dioecy is thought to have evolved just once, scientists believe dioecy in plants has evolved numerous times. And, according to Tranel’s study, it appears to have evolved independently in waterhemp and Palmer amaranth, two very closely related species.

“I’m not ready to say we absolutely know they evolved separately, but all the information we found supports that idea. Only two of the 120-150 genes were similar to each other across the two species,” Tranel says.

One of those shared genes, Florigen, helps plants respond to day length by initiating flowering. Tranel doesn’t know yet whether it determines the gender of flowers, but he’s intrigued that it showed up in the male-specific Y region for both species.

“We don’t know for sure, but maybe it’s involved with males flowering earlier than females. That could be advantageous to males because then they’d be shedding pollen when the first females become receptive. So if, in fact, Palmer and waterhemp really did evolve dioecy separately, but both acquired this Florigen gene for a fitness advantage, that would be a cool example of parallel evolution.”

Tranel hopes to narrow down the male-specific Y region in both species even further to isolate the genes that determine maleness. There’s no guarantee a genetic control solution will be developed once those genes are identified – Tranel would likely need to attract industry partners for that – but having such a tool is not as far off as it once was.

The article, “Male-specific Y-chromosomal regions in waterhemp (Amaranthus tuberculatus) and Palmer amaranth (Amaranthus palmeri),” is published in New Phytologist [DOI: 10.1111/nph.17108]. Authors include Jacob Montgomery, Darci Giacomini, and Pat Tranel of the University of Illinois, and Detlef Weigel of the Max Planck Institute for Developmental Biology. The project was supported by the USDA National Institute of Food and Agriculture and the Max Planck Society.

Learn How Bioreactors Are Being Used to Improve Water Quality

Dakota Gardener: Now is the time to kill weeds in lawns
October 4, 2021