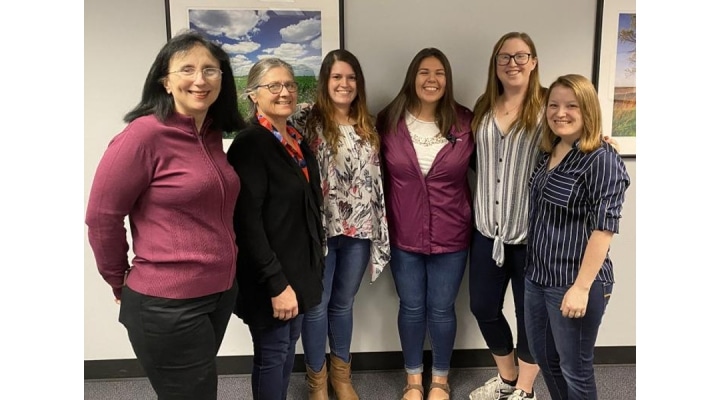 Research from the University of Illinois shows male piglets whose mothers were ill during pregnancy show genetic changes in the amygdala and are less resilient to a second stressful event, weaning, than females and piglets whose mothers weren't ill during pregnancy. From left: Sandra Rodriguez-Zas, Laurie Rund, Courtni Bolt, Olivia Perez, Haley Rymut, and Marissa Keever-Keigher (Photo: University of Illinois)

URBANA, Ill. — When pigs get hit with significant illnesses during key stages of pregnancy, their immune response may negatively affect developing piglets, making them less productive on the farm. New research from the University of Illinois shows that when those piglets – especially males – experience a second stressor in early life, they are at higher risk of neurodevelopmental and other neurological anomalies, putting them at an even greater disadvantage in production settings.

“With more information about maternal illness, what we call maternal immune activation, we can make better decisions about how to handle these types of immune challenges within animal production settings,” says Marissa Keever-Keigher, doctoral student in the Department of Animal Sciences at Illinois and lead researcher on the study.

Studying brain development in the domestic pig is relevant on the farm, of course, but pig studies can also inform human neurodevelopmental research. That’s because the pig’s development, genetics, brain structure, and more are very similar to our own.

In previous pig studies looking at the effects of maternal immune activation, Keever-Keigher and her colleagues showed important genetic changes occur in the piglet amygdala, a brain structure that plays an important role in learning, social behavior, and stress response in both humans and pigs.

The researchers also knew from primate and rodent studies that a second immune challenge, known as a double hit, can further disrupt typical brain development in young animals. To test the double hit hypothesis in pigs, the team chose weaning as the second challenge.

“While weaning is not itself an immune challenge, it is an extremely stressful time during a piglet’s life and can elicit an immune response,” says Haley Rymut, doctoral student in animal sciences and co-author on the study. “Piglets have to deal with a broad array of stressors, including physical stressors from being handled and moved, and emotional stressors from being taken away from the mom and placed with their peers. Any of those physical or emotional stressors can kick off an immune response.”

The researchers looked at a combination of factors for piglets in the study: whether or not their moms were infected with porcine reproductive and respiratory syndrome virus (PRRSV) during gestation, and whether or not they were weaned at 21 days of age, the typical age in production settings. They also noted the sex of the piglets, as their earlier research indicated male piglets showed more changes in the amygdala as a result of maternal illness.

“Using high throughput sequencing technologies, we were able to monitor the levels of more than 16,000 genes in the pigs. We uncovered more than 100 genes and molecular pathways affected by either maternal immune activation, weaning, sex, or a combination of factors in the amygdala on day 22 for all piglets. The effect of pre- and postnatal stressors on neuropeptide genes confirms the plasticity of the infant brain during development to respond and adapt to challenges,” says Sandra Rodriguez-Zas, professor in animal sciences and faculty advisor to Keever-Keigher and Rymut. Rodriguez-Zas is principal investigator of the U.S. Department of Agriculture-funded study.

Many of the genes expressed at higher or lower-than-typical rates in weaned piglets from virus-infected mothers have been associated with autism spectrum disorder (ASD) and schizophrenia spectrum disorder (SSD) in previous studies. But genes relevant to other neurological disorders were affected too.

“We also found changes in expression of genes associated with neurodegenerative diseases like Huntington’s and Alzheimer’s disease,” Keever-Keigher says.

As in the scientists’ previous work, the double hit affected male piglets more than females, with greater dysregulation of genes in the amygdala. The researchers found evidence of more protective pathways in female brains, giving them an advantage in handling stressful events.

The study provides valuable clues for researchers studying ASD, SSD, and neurodegenerative disorders in humans, even though some aspects might not translate directly.

Rymut says, “For most children, weaning isn’t nearly as stressful as it is for pigs in a production setting. But many other traumatic events early in childhood could set up that double hit.”

On the farm, pigs from virus-infected mothers often show anti-social behaviors. Because pigs are typically group-housed and fed via communal feeders, pigs that don’t like being around their peers are often last to feed and generally more stressed, leading to slower growth rates and lower overall body condition scores.

“The lesson for swine producers, I think, is to be really mindful of stressful conditions in the production cycle, and try to mitigate those as much as we can in order to create the most productive and healthy livestock animals and benefit producers’ bottom lines,” Keever-Keigher says.

Rymut adds, “Also, knowing how the different sexes respond could help producers manage animals that are less likely to be productive as a result of maternal immune activation.”