Home » Make the trek to MCR Maple for some sweet talk this March! 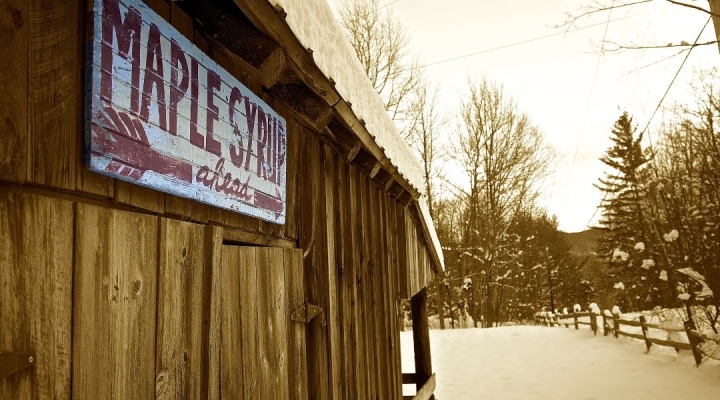 At this year’s Maple Weekends coming up on March 19-20 and 26-27, MCR Maple will be offering boiling demonstrations, syrup tasting, and, depending on the weather, farm tours and wagon rides. (Albert Lew, Flickr/Creative Commons)

NORTH CREEK, N.Y. — Come to us for the sweet talk! MCR Maple is a small producer located in North Creek in Warren County operated by Kevin and Heidi Feldt. MCR Maple is a self-described “old-fashioned” sugarhouse working 800 taps and boiling sap in a wood-fired evaporator.

Kevin has been making maple syrup since he was a kid, but it wasn’t until a few years ago that it became a business for him. Kevin bought the property on which MCR Maple sits in 2002. The land came with an old sugarhouse and for many years he and his wife Heidi would make maple syrup each spring. In 2016, however, the Feldts decided to turn their hobby into a business, and they increased the number of taps on the property. Kevin and Heidi immersed themselves in maple education traveling to maple open houses throughout the region to learn how to effectively run a maple business and stay on top of the latest research.

Through what they have learned at maple events, Kevin and Heidi have worked in recent years to make MCR Maple an accessible and serviceable sugar house, in addition to expanding the operation in general. Kevin gave examples such as making a clear road to the sugarhouse and installing a bathroom at the sugarhouse. Attributes like these make a customer’s visit more pleasant and can encourage them to return in the future. MCR’s maple syrup is sold out of their sugarhouse along with the other products their farm raises at other times of the year like various meats, eggs, and vegetables. In the fall they offer pumpkins too.

MCR Maple operates a bit more old-fashioned than other maple producers by using a wood-fired evaporator and not using a reverse osmosis machine. The Feldts want to keep this old-fashioned element to their operation because they feel by being a small-scale producer, they can provide a personal touch for visitors at their farm. For customers that come to the sugarhouse Kevin or Heidi will give tours tailored to each person depending on how much they want to know about the process. Kevin has found the more time that is spent with a customer, the more likely they are to buy something and/or return later on. So, staying small and personal is an important part of MCR Maple’s operation and their desire to provide every customer with a good product and experience.

At this year’s Maple Weekends coming up on March 19-20 and 26-27, MCR Maple will be offering boiling demonstrations, syrup tasting, and, depending on the weather, farm tours and wagon rides. In the eight counties of the Upper Hudson region, over 20 sugar houses will open their doors so visitors can see how sugarmakers turn maple sap into the finest maple syrup on earth. Fresh maple products will be available to purchase, and many sugarhouses will be serving breakfast.

For updates and to find out more about MCR Maple check out their Facebook page. For more info on the 2022 NYS Maple Weekends and a list of producers to visit check out the new and improved Upper Hudson Maple Producers Association website at https://www.upperhudsonmaple.com/.