Home / Kentucky / Make it a double 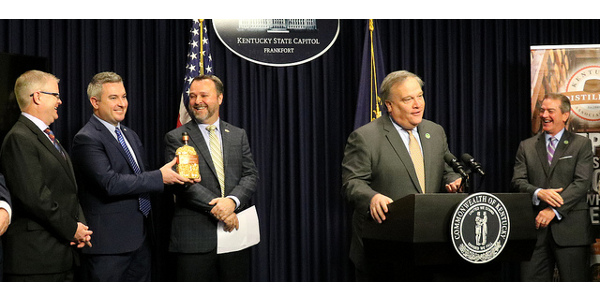 Commissioner Quarles shows off his bottle of corn at the urging of state Senate President Robert Stivers. The Kentucky Distillers' Association estimates that 56 percent of the corn used to produce Kentucky bourbon is purchased from Kentucky farmers. (Courtesy of Kentucky Department of Agriculture)

On Feb. 6, they poured bourbon inside the Capitol to toast the industry’s epic turnaround.

Bourbon barons joined elected officials and key business executives to unveil a new study that shows the homegrown industry now provides twice as many jobs, payroll, capital investment and tax revenue than a decade ago.

Kentucky bourbon now pours $8.6 billion each year into the state’s economy, generates more than 20,100 well-paying jobs with an annual payroll topping $1 billion, provides $235 million in local and state tax revenue, and is in the middle of a $2.3 billion building boom.

Also, the number of distilleries in Kentucky has more than tripled to 68 in that time; the number of counties with a distillery has quadrupled to 32; and there are now nearly two barrels of spirits for every person in the Commonwealth – valued at $3 billion, three times more than 2009.

“What a monumental success story,” Gregory said. “By working together to remove unnecessary and artificial barriers to business, we have transformed Kentucky bourbon from an industry once viewed as ‘sin’ to one that truly defines signature impact, expansion and global image.

“This is the epitome of how a public-private partnership works.”

Gregory said the industry continues to work with state Commissioner of Agriculture Ryan Quarles to increase usage of Kentucky corn. More than half of all distiller’s grain purchases are made from Kentucky farm families, the study showed.

“As Agriculture Commissioner, I have the great benefit of being an ambassador for bourbon, which could go by its other name: distilled corn,” Quarles said. “I applaud the KDA members for purchasing more than 9 million bushels of corn and other grains from our farmers.

“In an era of low commodity prices, Kentucky farm families appreciate their willingness to source local.”

“The Commonwealth has a long, proud history of distilling, and the economic impact made by our Bourbon and spirits producers is recognized at national and international levels.” Gov. Bevin said.

“As a signature industry, Kentucky embraces with open arms any business looking to build on the growing momentum of the Bourbon industry.”

Senate President Robert Stivers, R-Manchester, who boldly led the charge in 2014 against barrel taxes, said, “The tremendous economic expansion of Bourbon is testament to what a true signature industry means for this state.

“Every time we pass legislation that takes the regulatory shackles off this legendary industry, our Commonwealth sees record investment, jobs and growth. That’s a return on investment that makes for sound public policy.”

House Speaker David Osborne, R-Prospect, said, “The success of Kentucky Bourbon is a perfect example of how lawmakers can facilitate job growth and capital investment. We simply got government out of the way and let the industry thrive under less regulation and red tape.”

Speaker Osborne and Rep. Chad McCoy, R-Bardstown, were instrumental in the last two major pieces of legislation to benefit Bourbon tourism: House Bill 100, which authorized vintage spirits sales in 2017, and HB 400 in 2018 that gives visitors the ability to ship bottles home.

Rick Robinson, Chairman of the KDA’s Board of Directors and Vice President of Product Supply Chain at Campari America, also highlighted Senate Bill 11 from 2016 and thanked its sponsor, Sen. John Schickel, R-Union.

“The impact of Senate Bill 11 has been enormous by giving distilleries the simple ability to sell cocktails,” Robinson said. “It has spurred tens of millions in investment and allowed our distilleries to offer a more robust, immersive tourism experience.”

Bill Samuels Jr., one of the Bourbon barons who poured whiskey on the Capitol steps a decade ago, credits the Commonwealth for partnering with the Bourbon industry during this time of tremendous growth. Samuels is Chairman Emeritus of Maker’s Mark Distillery.

“Kentucky and its citizens have been the big winners since the General Assembly reversed course and began reducing taxes and eliminating Prohibition-era regulations on the spirits industry,” he said. “This new economic impact study proves that conclusively.”

“It’s not just an industry sector that is succeeding, it’s additional jobs for Kentucky families, additional income for tens of thousands, and additional tax revenue that will benefit schools and other services that serve all Kentuckians,” he said. “This is a win for all of us.”

The biennial study was conducted by renowned economists Dr. Paul Coomes and Barry Kornstein, formerly of the University of Louisville, in conjunction with the Kentucky Distillers’ Association.

In the study, Dr. Coomes noted that their analysis is based on data collected before retaliatory tariffs on whiskey exports were imposed by the European Union, China, Canada, Mexico and Turkey. Therefore, the impact on Kentucky distilling is not yet detectable in this report.

Highlights of the 2019 Bourbon Study

Despite the success, KDA President Gregory noted that there is still more work to be done.

Rep. Matt Koch, R-Paris, recently filed House Bill 200 that would allow distilleries to sell exclusive bottles at their gift shops, a privilege that wine and beer already enjoy, as well as distillers in most other states and around the world.

“Tourists want to buy something at our distilleries that they can’t get anywhere else,” Rep. Koch said. “This will increase attendance and pour more revenue into our local communities, especially with repeat visitors who will come year after year to get those rare offerings.”

Gregory said bourbon tourists made a record 1.4 million distillery stops in 2018 – a 370 percent increase over the last 10 years. The Kentucky Bourbon Trail® logged 1 million visits for the first time since its creation in 1999.

“The bourbon economy is good for communities across the state, whether it’s a distillery in your hometown, stave mill, corn grower or trucking company,” he said. “It is difficult to overstate just how much an impact this signature industry has had on our economy, especially in recent years.

“I’m proud that the legislation I sponsored has helped to make this growth possible.”

Another area that needs work is the industry’s barrel tax, Gregory said.

Legislators need to update the non-refundable Bourbon Barrel Reinvestment Credit passed in 2014, he said. “It was a key spark in igniting our revolution and record investment. In fact, it’s worked too well.”

“Distillers can’t realize the full benefit of the barrel credit, which means less money they can reinvest for future growth,” Gregory said. “We should not have a tax structure that penalizes increased production and investment. The barrel credit needs to be refundable or transferrable.”

While distilleries are reinvesting those barrel tax credits into facilities across this state, downtown Louisville is one of the main areas that has seen a boom in bourbon investment, said Senate Minority Leader Morgan McGarvey, D-Louisville.

“Distilling has a rich history in Louisville, along the banks of the Ohio River, and we should embrace the industry and its success and create public policy that support companies reinvesting in our communities.”

Gregory thanked elected leaders who have embraced bourbon’s concerted effort to be good corporate partners, and praised the industry’s continued support of social responsibility issues like the revamped ignition interlock bill being debated in the current legislative session.

“We are grateful that lawmakers recognize the vital role that our industry plays in jobs, revenue and tourism, and we look forward to working with them to continue our record momentum and to strengthen Kentucky’s rightful place as the one, true and authentic home of bourbon.”

A copy of the full report is available online at kybourbon.com.