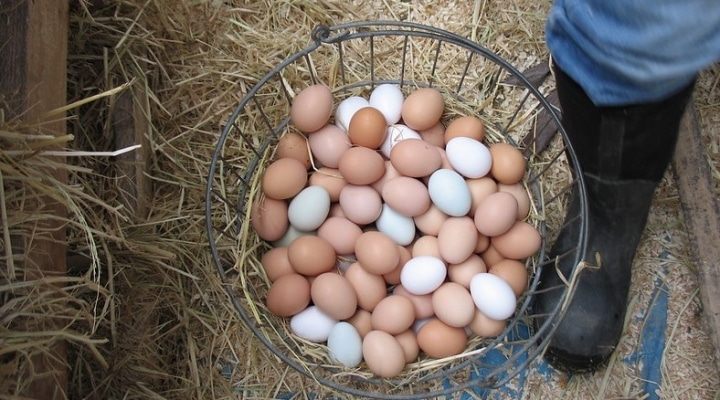 Bill Bell, general manager of the New England Brown Egg Council, said the law change would respond to a growing customer demand. Republican Sen. Jeff Timberlake, a Republican and farmer from Turner, said he has concerns about the cost of cage-free eggs, which are double the cost of eggs raised on conventional farms. (Stock photo via Bob Doran, Flickr/Creative Commons)

PORTLAND, Maine (AP) — Maine might join a growing number of states that require cage-free facilities for chickens that lay eggs for commercial consumption, but some industry advocates have concerns about what it would mean for businesses.

Democratic Rep. Maggie O’Neil of Saco has proposed requiring producers that sell eggs in the state to follow guidelines including cage-free housing systems that allow chickens to engage in behaviors such as perching and spreading their wings. O’Neil’s proposal, if approved, would usher in guidelines developed by animal welfare groups and members of the egg industry.

Consumers, retailers, many producers and welfare advocates all agree that “the future of the egg industry is cage-free,” O’Neil said. It’s “imperative that we act now to establish a reasonable timeline so egg producers can plan for the future of their businesses,” she said.

And Bill Bell, general manager of the New England Brown Egg Council, said the law change would respond to a growing customer demand.

“As in any business, egg producers must supply what their customers want, and our customers — the retailers, the restaurants and the fast food chains, want ‘cage-free’ eggs,” Bell said.

But Republican Sen. Jeff Timberlake, a Republican and farmer from Turner, said he has concerns about the cost of cage-free eggs, which are double the cost of eggs raised on conventional farms. He also said it would be difficult for Maine’s largest egg producer to upgrade its facilities for cage-free production.

The former DeCoster Egg Farm, now called Hillandale Farms, used to have 5 million egg-laying chickens at its peak, but the number of chickens is now closer to 1 million, he said.

Hillandale is agreeable to the idea of cage-free eggs, but can’t guarantee the Turner farm can meet the bill’s deadline of the end of 2024, said Stephen Vendemia, president of Hillandale operator Hillandale Farms Conn LLC. However, there is “no question as to Hillandale Farm’s commitment to cage-free,” Vendemia wrote in testimony about the bill.

In Maine, the bill wouldn’t ban farms in which chickens are caged, but it would ban the sale of eggs in Maine produced from those facilities.

The market is already moving in the direction of more cage-free eggs because some supermarkets are demanding them, Timberlake said. Consumers have a choice of paying more for cage-free eggs, he said.

“Our opinion is, why not let the free market take over? Let consumers decide whether they want cage-free eggs,” he said.

Turner Town Manager Kurt Schaub said he wasn’t aware of the legislative proposal. “I can’t say that I’m surprised. It seems to be a trend. Whether it goes anywhere remains to be seen,” he said.

Jim Buckle, president of the Maine Farm Bureau Association, testified against the bill. He wrote that the state should “let the market choose what they want to eat.”

Massachusetts, Michigan, California, Oregon and Washington have passed cage-free egg laws via legislation or public votes. The Maine proposal is up for a work session in the coming weeks, after which it would face votes before the Maine Legislature.