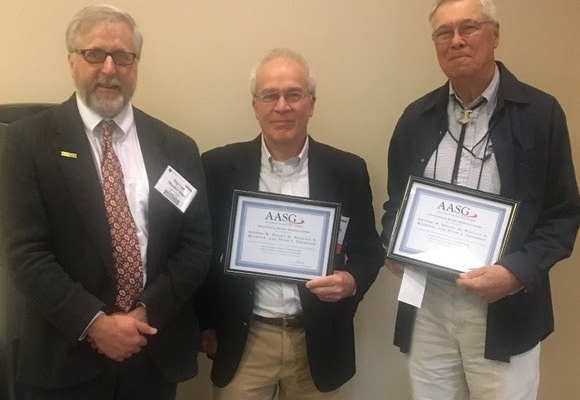 AUGUSTA, Maine — The Maine Geological Survey (MGS) has received a national award for one of its publications. Bedrock Geology of the Kittery 1:100,000 Quadrangle, Southwestern Maine and Southeastern New Hampshire (MGS Bulletin 45 and accompanying MGS Geologic Map 16-6) is the recipient of the Association of American State Geologist’s 2017 Charles J. Mankin Memorial Award. The Award is given each year to a geological map, compilation, or report on regional, energy, or mineral resource geology published by a state geological survey. Bulletin 45\Geologic Map 16-6 was judged to be the best publication in a very competitive field of nominations spanning the nation. The work marks the culmination of decades of mapping by Arthur Hussey in Maine, and Wallace Bothner in New Hampshire, with significant contributions by Peter Thompson.

This award honors the memory of Charles Mankin (1932-2012), who as Director of the Oklahoma Geological Survey for forty years (1967-2007) was a tireless advocate for geologic mapping. Charlie played a key role in establishing the National Cooperative Geologic Mapping Program administered through the U.S. Geological Survey that provides crucial funding to the state geological surveys for geologic mapping. Much of the work captured in B 45 and GM 16-6 was funded through this program.

Bedrock of the Kittery quadrangle records over 500 million years of earth history, from sedimentation and volcanic activity in an ancient ocean basin through continental collision and assembly of the supercontinent Pangea, to continental rifting and the evolution of the modern Atlantic Ocean. Written to appeal to a broad audience of geologists, consultants, educators, and the general public, the bulletin and map are richly illustrated with photographs and diagrams.

The publication is available at Digital Maine.