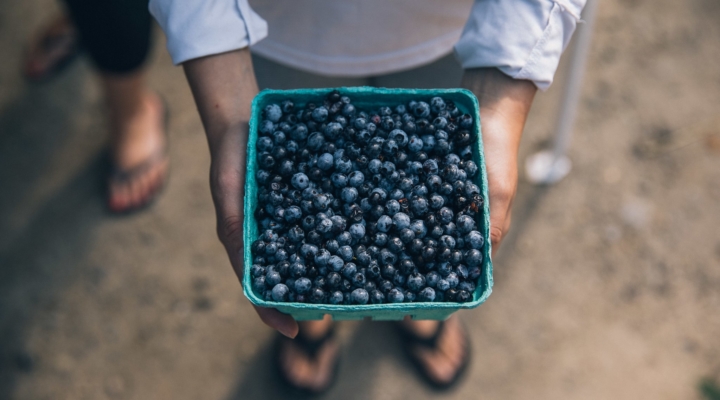 The wild blueberry industry is weathering a difficult time, as harvesters collected about 57 million pounds of the fruit in 2018, down nearly 11 million pounds from the previous year. Prices have been lukewarm, too. (Allagash Brewing, Flickr/Creative Commons)

PORTLAND, Maine (AP) — Maine lawmakers might try to pump some life into the state’s troubled wild blueberry industry by overhauling the makeup of the commission that promotes the state’s most important fruit crop.

Maine is America’s sole significant commercial producer of wild blueberries. These are smaller than the ubiquitous cultivated blueberries and are used in lots of frozen and processed products. The industry is weathering a difficult time, as harvesters collected about 57 million pounds of the fruit in 2018, down nearly 11 million pounds from the previous year. Prices have been lukewarm, too.

A legislative committee is considering a bill to expand the number of people who sit on the Wild Blueberry Commission of Maine, which is tasked with coordinating promotion, education, policy, research and development of the fruit. The proposal could also help the commission represent a broader cross section of the state’s wild blueberry industry, supporters said.

The bill, presented by Democratic Rep. Robert Alley, would increase the number of members on the commission from eight to 10, and broaden its reach by encouraging participation from organic farmers, tribal growers, representatives from the fresh packing industry and others.

The proposal faces a Thursday committee vote. The interim executive director of the commission itself said changing the composition of the board could benefit the blueberry business, which is situated mostly in rural Down East Maine.

The commission is “ready to accept some help in negotiating this downturn in the industry,” which has been hard on growers and processors, Patricia Kontur said.

“It has been tough. And also, we understand that we need to diversify a little more in order to succeed because we really have some strong competition with the cultivated blueberries,” she said.

The wild blueberry industry also faces competition from the provinces of Atlantic Canada, which grow the same crop. And it’s struggled in recent years with fungal diseases, less-than-ideal weather and difficulty in opening up new markets during recent years of heavy supply.

Alley testified in February that changes could provide “the necessary vitality and diversity to help the growers get through this difficult time.” The commission’s activities are funded by farmers and processors who pay a penny-and-a-half tax on every pound of blueberries produced in the state. That amounts to about $1 million in a typical year.