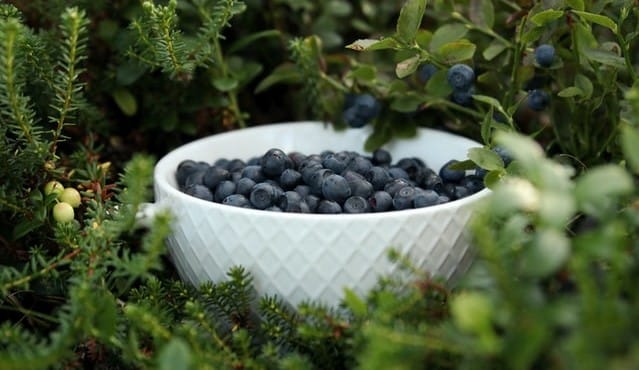 Wild blueberries differ from the ubiquitous cultivated blueberries in that they are smaller and occur naturally in fields called blueberry barrens. Maine's blueberry industry has touted the wild blueberries as a potential piece of the “superfood” movement in recent years. (Photo by Elisa on Unsplash)

PORTLAND, Maine (AP) — A late spring frost, a devastating drought and labor troubles wrought by the coronavirus pandemic conspired to make 2020 a difficult year for the wild blueberry producers who harvest the fruit in the nation’s northeastern corner.

America’s producers of wild blueberries are largely located in Maine, where the blueberry industry has battled fungal plant diseases and erratic market conditions in recent years. The harvest takes place every summer, and this year’s crop was likely far off last year’s total of about 87 million pounds, industry experts said.

One of the biggest problems was the drought, which afflicted much of northern New England throughout the summer. The rural Maine counties that contain most of the country’s wild blueberry fields are even now facing moderate drought conditions, according to the U.S. Drought Monitor.

The pandemic also made it more difficult to hire seasonal workers and created a need for additional safety measures that complicated the harvest. Add a surprise frost in early June, and it added up to “most definitely a challenging season,” said Lily Calderwood. a wild blueberry specialist at University of Maine Cooperative Extension.

“It was uniquely challenging, but we have had late frosts in the past and we have had drought in the past,” she said. “The growers are a very resilient group of farmers who grow a very diverse crop.”

Wild blueberries differ from the ubiquitous cultivated blueberries in that they are smaller and occur naturally in fields called blueberry barrens. Maine’s blueberry industry has touted the wild blueberries as a potential piece of the “superfood” movement in recent years. Most of the crop is frozen, though some are sold in Maine farm stands and supermarkets every August.

The five-year average for the size of the crop is nearly 84 million pounds, but signs point to a crop that could be half of expectations this year, according to the Wild Blueberry Commission of Maine. However, demand for the fruit has increased recently, and the industry has the ability to bounce back from the tough year, said Eric Venturini, the executive director of the blueberry commission.

“Despite the down year in terms of production, demand is high,” he said. “I think leveraging that will definitely be part of the game plan.”

Maine competes with Canada in the wild blueberry market, and some companies operate on both sides of the border. The uneven exchange rate with Canada has caused economic problems for Maine’s industry in recent years. Still, prices to farmers have rebounded in recent seasons after down years in 2016 and 2017.

This year, some blueberry workers tested positive for coronavirus, and companies responded by keeping them in quarantine. Workers were tested before they began work to prevent potential outbreaks.

It was a frustrating year in the fields, but the industry was able to prevent spreading coronavirus to surrounding communities in Washington County, where many fields are located, said Homer Woodward, vice president of operations for Wyman’s, one of the major players in the industry.

“The size of the crop was disappointing but as far as navigating COVID, as far as preventing it from becoming a problem in Washington County, I think that was a success for the industry,” Woodward said.